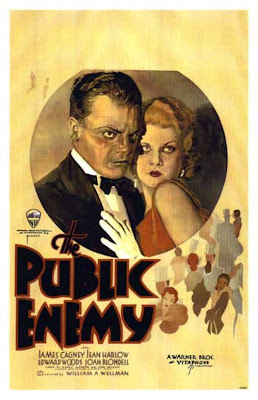 Known for its infamous "grapefruit" scene (the scene that Mae Clark admitted years later helped her to get work), The Public Enemy follows the life of Tom Powers from a scrappy pre-teen to his inevitable and untimely death before thirty. It's an interesting story based on true characters and like most films in the pre-code, Depression era, it's message is a double-edged sword. The timeline is set during Prohibition and WWI. Tom and his older, more self-righteous brother, Mike, who is consistently trying to get Tom back on the straight and narrow path, have always clashed. Mike has always set a good example, volunteered to go to war, denied a lucrative life of crime to work a low-paying job and go to night school. Tom considers Mike’s self-righteousness hypocritical. When Mike quips that Tom's success is based on nothing more than “beer and blood”, Tom rejoins that “your hands ain't so clean. You killed and liked it. You didn't get them medals for holding hands with them Germans.” Oh snap! Tricky! But the overall message is clear, a life of crime does pay but with high dividends also comes high risk. 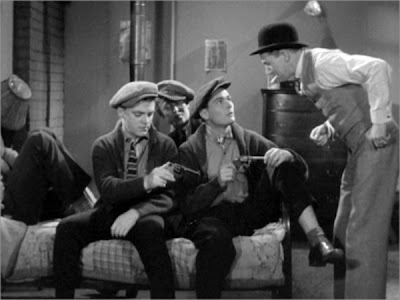 The Public Enemy is the film that established Cagney as the "tough guy" an image he tried with numerous roles to escape. He wasn't even supposed to be the lead actor in The Public Enemy but when William Wellman viewed the rushes he realized that Cagney's mode of speaking, his shortness of stature and uncouth appearance would better depict gangster Tom Powers than the more suave and polished Edward Woods could. Thus, the roles were switched and history was made. 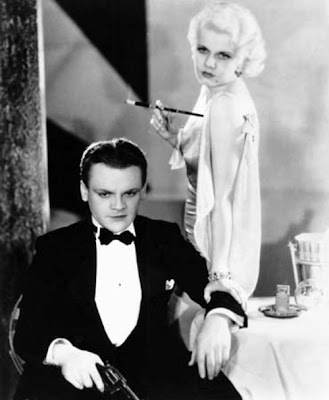 The film is very good. To watch Tom Powers go from bad to worse is both captivating and intense. Cagney plays him beautifully. After the way he callously treats his moll, Kitty, you realize he has no conscience, he's capable of all types of evil and you want to see how far he will go. The only set back to the film was the inconsistency in some scenes that make the viewer feel like they have missed out on something. Mainly the relationship between Tom and Gwen and the conflict between the rival gangs. Whether this is due to the beginning of the "talkie" era or the penchant for producers to have film cut due to time, I am not sure. But I see this a lot in films from the early thirties and can only assume that directors were still trying to figure out some way to get the scenes to flow harmoniously together since dialogue cards were a thing of the past. 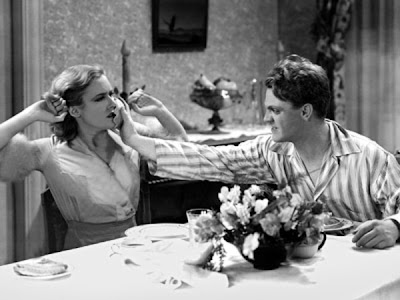 The ending is also noteworthy. You know Tom Powers will come to a bad end, it's a message film and if he isn't willing to change then he must be disposed of. But the way the scene is set up with his mother happily and busily making up Tom's bed for his arrival home from the hospital and her other son Mike downstairs opening the door to an upright but dead brother, delivered by the rival gang is eerie and apt, especially after mother and brother had just visited a repentant Tom in the hospital. Driving the point home that others will suffer for your dirty deeds. 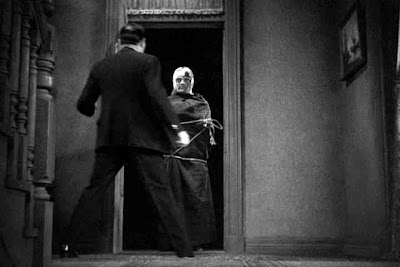 Tonight on TCM!
Stanley Kubrick!
Posted by Sarah at 5:15 AM