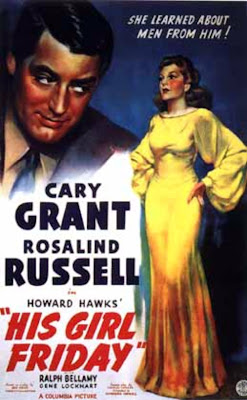 Synopsis (Wikipedia):
Walter Burns (Cary Grant) is a hard-boiled editor for The Morning Post whose ex-wife and former star reporter, Hildegard "Hildy" Johnson (Rosalind Russell) is about to marry bland insurance man Bruce Baldwin (Ralph Bellamy) and settle down to a quiet life as a wife and mother in Albany, New York – but Burns intends to sabotage these plans. He entices the reluctant Johnson into covering one last story: the upcoming execution of convicted murderer Earl Williams (John Qualen). 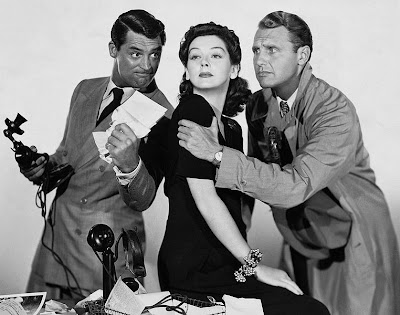 Walter does everything he can to keep Hildy from leaving, including setting Bruce up so he gets arrested over and over again on trumped-up charges. He even kidnaps Hildy's stern mother-in-law-to-be (Alma Kruger). When Williams escapes from the bumbling sheriff (Gene Lockhart) and practically falls into Hildy's lap, the lure of a big scoop proves to be too much for her. She is so consumed with writing the story that she hardly notices as Bruce realizes his cause is hopeless and leaves to return to Albany. 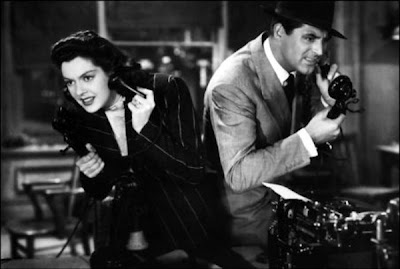 The crooked mayor (Clarence Kolb) and sheriff need the publicity from the execution to keep their jobs in an upcoming election, so when a messenger (Billy Gilbert) brings them a reprieve from the governor, they try to bribe the man to go away and return later, when it will be too late. Walter and Hildy find out just in time to save Walter from being arrested for kidnapping. 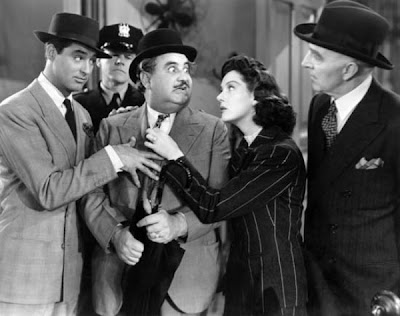 Afterwards, Walter offers to remarry Hildy, promising to take her on the honeymoon they never had in Niagara Falls, but then Walter learns that there is a newsworthy strike in Albany, which is on the way to Niagara Falls by train. 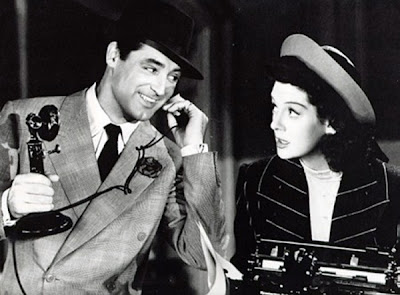 I enjoyed this film very much as I love Cary Grant and think Rosalind Russell has wonderful comedic timing. I was a little disappointed that after all she went through to try and get away from Walter, she was so easily sucked back in without him having to change at all. It made it seem like she got a divorce just to get his attention. But I do not have the time nor patience to catalogue and complain how most of these old films always had some underlying sexism and misogyny. His Girl Friday is known for it's rapid and overlying dialogue. Howard Hawks wanted a make the conversations more realistic. He achieved this by having the actors ad-lib and turning certain overhead microphones on and off during a scene. The effect worked and the product is hilarious especially Billy Gilbert's short scenes.