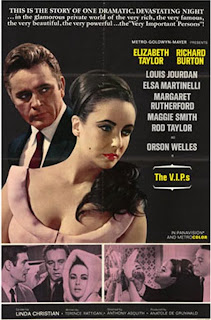 Set in the V.I.P. section of a terminal at Heathrow, characters and their stories interconnect as each try to reach a highly significant destination. Grounded by fog for an indeterminable amount of time, the central characters Frances Andros (Elizabeth Taylor) and international playboy Marc Champselle (Louis Jourdan) worry over the note that Frances has left her husband, millionaire Paul Andros (Richard Burton). After thirteen years of marriage, Frances is leaving Paul because he no longer seems to need her. She is eloping with Marc who is much needier for her affection and truly loves her for her and not her money, which she will also be leaving behind.


Film producer Max Buda (Orson Welles) must leave London by midnight in order to avoid paying hefty taxes from the profit of his film work. Taking his newest protégée Gloria Gritti (Elsa Martinelli) with him, he will need to make serious sacrifices to his art and his personal life to avoid paying out.

Les Mangrum (Rod Taylor), an Australian businessman has just taken a huge risk by writing a bad check to cover for the stock he bought in order for his company not to be bought out. Hoping to get to his board meeting in New York and get the money to cover the bad check before it goes through, Mangum is lost when his plane is grounded and his backers in New York refuse to wire the needed funds. His secretary, Miss Mead (Maggie Smith), is the soul of efficiency and discretion. Secretly in love with Mangrum, she does what it takes to save Mangrum's company.

Lastly, there is The Duchess of Brighton (Margaret Rutherford), who is on her way to Florida to take a job which will pay her enough money to save her ancestral home which she is loathe to leave. Unfamiliar with planes, she is on a mixture of uppers and downers given to her by friends to help her get through the travel.

This is the third film I have seen with the Taylor-Burton pairing and by far pales in comparison to the other two. Lacking the powerful dialogue and action I saw in Who’s Afraid of Virginia Woolf? and The Taming of the Shrew, I had the sense they were simply going through the motions. It’s rumored that Taylor asked for this role specifically because she did not want Sophia Loren (who director Anthony Asquith wanted) near Burton. However, it’s just as likely that the box office draw of Taylor and Burton directly after the Cleopatra debacle both on and off the screen convince Asquith to pair them up.

However, that does not mean the movie is not interesting, it’s definitley worth a watch to see the comedy relief provided by Welles and Rutherford. Personally, I could watch Rutherford all day, she has a very unique way of speaking and acting that I find highly amusing.

Tonight on TCM! Ann Dvorak!
Scarface (1932) A murderous thug shoots his way to the top of the mobs while trying to protect his sister from the criminal life. Dir: Howard Hawks Cast: Paul Muni, Ann Dvorak, Karen Morley.