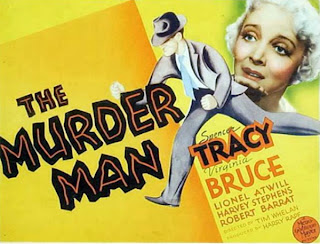 Shortly after hanging up on a desperate client that he and his partner Henry Mander (Harvey Stephens) have swindled money from, James Halford (Theodore von Eltz) gets into a verbal confrontation with Mander. Demanding he get the twenty thousand back from a risky investment that may blow their cover, Halford leaves the office and is discovered shot in his car when the chauffeur arrives at his home. Meanwhile, Mander is at the shooting gallery across the street from their office, having been told there will be a message awaiting him there. But there is no message.


When the Daily Star catches wind of the murder, Hal Robins (Robert Barrat) sends out a search party for the often drunk Steve Grey (Spencer Tracy) whose habit of scooping all the other papers and penning an interesting story, makes him he ideal man to follow the biggest story of the year. In fact, Grey is so good he is one step ahead of the story, able to dictate in advance of what is about to occur. Like when Mander is arrested under the suspicion that he killed Halford for the insurance claim.

However, it isn’t just that Grey’s a great writer; he has a personal history with Halford and Mander. When he is put on the stand to testify against Mander after stating he overheard Mander in an incriminating conversation, he makes no secret that Mander and Halford swindled Grey’s own father out of money. Despite this, Grey successfully manages to put the nail in Mander’s coffin; he is convicted and sentenced to execution. This is exactly what Grey wants or at least what he thought he wanted. Columnist Mary Shannon (Virginia Bruce) is in love with Steve, she is everything good and pure in his life. She makes him question what he has done for the sake of vengeance. You see, Steve not only watched his father lose all his money to Halford and Mander, he also suffered through watching his wife carry on an affair with Halford before he coldly tossed her aside, successfully managing to get all her money as well- leading her to commit suicide. 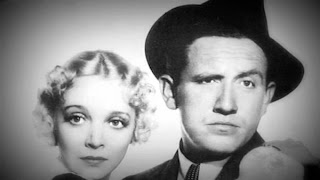 So Grey called Mander to the shooting gallery, stating there was a message awaiting him there. Grey took one of the guns and shot Halford in his car as he was being driven home. And Grey testified against Mander stating he overheard him promising to use the insurance money to pay back a client. He manages to successfully murder one man and have the other take the fall for it.


But now Grey has an attack of conscience. It doesn’t help that Robins assigns him to meet with and write Mander’s last story before he is executed. After struggling with the proper words and arguing with Robins, Grey dictates the real truth on the gramophone and asks Mary to type it up for him herself. As she listens in horror to what Grey has said, Grey takes himself to the police station to confess.

Hoping to catch him before he does confess, Mary breaks the record and runs to the station. However, Grey must tell his story. When he is taken away to be booked for murder, the commissioner assures Mary that the jury will take the full story of what’s transpired into consideration. 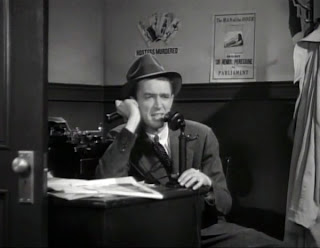 This movie was not only interesting due to the wonderful performance from Tracey, but also because of the unique ending. Though a bit drawn out, it was refreshing to see the story played out fully. Most movies of that era would have had the scene ending as Mary listens to Grey’s confession or as Grey enters the police station. Here we have the full confession again and the reason for it being told by Grey to an astonished commissioner. An added touch is that Grey phones into the Daily Star to make sure they get the story that Mary failed to produce- a scoop is a scoop after all! It was also interesting how the court story unfolds with interplay between the courtroom and the reporters rushing to the phones to give juicy tidbits of what’s going on.


Be on the look out for James Stewart in his first speaking role as “Shorty” the reporter.

Tonight on TCM!
Spend an evening with Orson- it won't hurt!