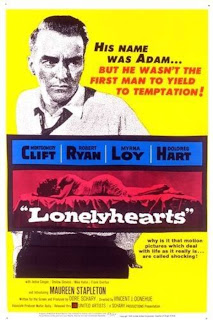 When the young and impressionable Adam White (Montgomery Clift) finally gets his wish to work for the Chronicle newspaper, he is unaware of how much his experience with the jaded Bill Shrike (Robert Ryan) will change him. Having sat for weeks waiting for the opportunity to meet Shrike, befriending his friendly but alcoholic wife (Myrna Loy) in the process, White is taken aback by Shrike’s overbearingly sardonic demeanor. He is further confused when Shrike assigns him the Miss Lonelyhearts advice column. Shrike has an ulterior motive for doing so caused by a major psychological burden that concerns in part Shrike’s unhappy wife who once cheated on him.
Initially Adam treats the letters as a joke, doggedly sticking to his task until the desperation in the letters start to affect him personally. Determined to rid Adam of any innocence on conscientiousness, to open his eyes to how the real world is, Shrike refuses Adam’s eventual request to be removed from the assignment.
Wanting to keep his job and to do right by the people writing the letters, Adam becomes more involved in his work which takes its toll on his relationship with girlfriend, Justy Sargeant (Dolores Heart). When Shrike suggests that Adam actually meet one of the letter writers so that he can see for himself that they’re mostly a bunch of fakes, Adam does so. He meets with Fay Doyle (Maureen Stapleton), whose husband she says is crippled and cannot love her in the physical sense. Giving her what he thinks she really needs, physical love, White goes into a tailspin when he realizes the truth about Fay. It causes him to reflect about his own personal life, the dark secrets he’s been keeping and most importantly whether Shrike is correct about people in general or not. 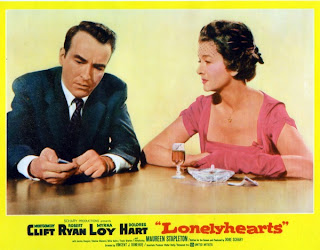 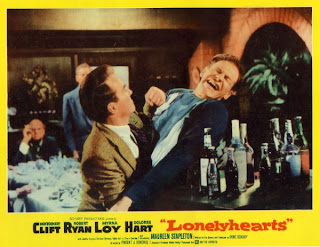 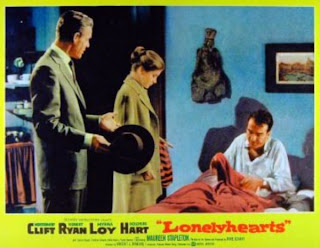 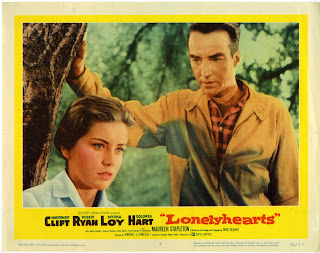 There is no doubt that Montgomery Clift was a gifted actor. He stands apart from the other characters in Lonelyhearts mostly in his stilted delivery of dialogue and the use of his large blue eyes and his small, almost fragile hands that add weight to his character who is very much a pacifist. Maureen Stapleton, a newcomer to the screen and who was nominated for the Best Supporting Actress for this film was also noteworthy. Her act of putting on an act was eerily convincing.

My only problem with the film was the weight of the dialogue, mostly delivered by Robert Ryan who manages to be a real SOB in this film. As a hard-boiled editor, they have him speaking too poetically and it didn’t sync with the physicality of the character, or the background scenes. 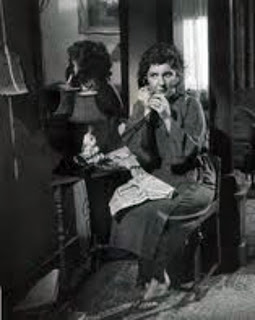 Myrna Loy never received a nomination for an Academy award. She did however received an Honorary Oscar for her entire portfolio of work.

Montgomery Clift received four Best Actor nominations for the Academy Award for his work in The Search, A Place in the Sun, From Here to Eternity, and Judgement at Nuremberg.