Well, it's that wonderful time of year again! Everyone is getting geared up for the Academy Awards ceremony and who better to tell the history of this wonderful award than TCM with host Robert Osborne, a published authority on the subject? If you haven't done so already, check out TCM for their wonderful line-up of Academy nominated films and stars while testing your classic cinema knowledge with a sixty-six question trivia quiz. 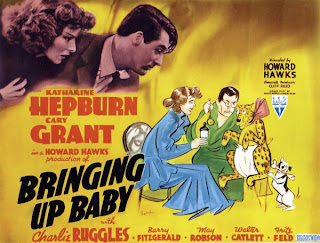 Last year I hosted a screening party  in order to get good use out of my TCM Oscar Party Pack and this year I have decided to do the same. Like last year, I will be screening a film that was not nominated for an Academy Award but I personally feel should have. This year I have chosen to screen a film close to my heart, Bringing Up Baby. This movie is jam-packed with hilarity, there is rarely a slow or unfunny moment in the entire film. With Howard Hawks usual tendency towards speedy dialogue, Hepburn and Grant pop out some real zingers. I loved this film growing up mostly because of Baby. I wanted a leopard of my very own for years but settled quite happily for my Blue Russian, Sable. As I grew and watched the film again and again, it became less about Baby (though I still love her) and more about the impossible, magical, wonderful interactions between Grant and Hepburn.
Though it won no Oscars, Bringing Up Baby is an awesome film and I totally recommend it to all.

Now, on to the giveaway!! I have been offered not only one TCM Oscar Party Pack but two. One of which I can give away! So I have decided, keeping within the TCM theme of Oscar trivia, to create a trivia quiz of my own in relation to the director and two stars of Bringing Up Baby. Whoever answers each question accurately will win, if there are two or more correct answers I will draw names from a hat. Due to time constraints this contest will close at 5PM on Sunday February 6th with the winner being announced on Monday.

The party pack will be similar to the one I received last year: 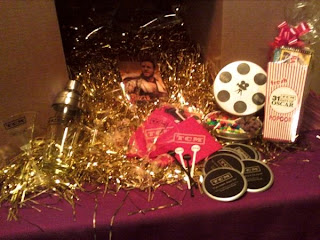 1. Howard Hawks was nominated for Best Director only once in his career. What was the name and year of the film?


2. How many times was Cary Grant nominated for Best Actor? What were the names and years of the films?


3. What are the names of the eight films that Katharine Hepburn was nominated Best Actress for but did not win?

4. Academy Award-wise, how are Hawks and Grant similar?


5. How many Academy Award Ceremonies did Hepburn attend?