Tuesdays with The Screen Guild Magazine...

History of The Screen Guild Magazine:

The magazine started in 1934 as The Screen Player. It was designed to keep members of the Screen Actors Guild (created a in 1933) current on guild activities. Later in 1934, the Screen Writers' Guild of Authors' League of America became a co-publisher of The Screen Player and the publication name was changed to The Screen Guilds' Magazine, later to become The Screen Guild Magazine, then from 1938 to 1947, The Screen Actor.
Despite the magazine's intention to promote the activities of the two guilds, there are several articles of general nature with the bulk coming from actors and actresses. These of which I will share with you. 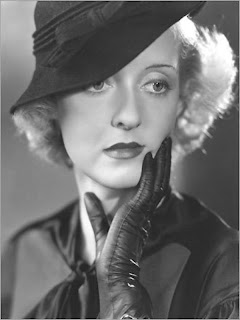 WHERE DID YOU GET THAT HAT?
by Bette Davis
[Reprinted from The Screen Guilds' Magazine, April 1936]

The most encouraging thing to me today in regard to our mutual industry is the trend towards realism. I don't mean that we've turned or back on Cinderella, but at least she no longer sits on the lap of the Cinema with her arms around her neck swinging her little glass slippers. Some screen millionaires have moved out of Grand Central Station and have found themselves more believable living quarters. A simple family chronicle like Ah, Wilderness is a success, and a success because it's real. Alice Adams is another example of the trend from puppets to people.

However, there is one department that in my opinion is still on the other side of the fence--the phony side, the gingerbread side. Actresses still don't look like people. The blame for that can be spread widely and thinly. The actresses themselves share in it. So do the costume designer, the make-up staff, and the front office, and the director.

I have had battles with a few directors, who consider that the all important thing was a striking appearance, well-groomed hair, immaculate clothes, an undisturbed make-up, or an exit from a drowning episode. I was solemnly told that we must not disappoint our public. It might disillusion them to know that we could look badly. I once saw a crowd of extra players, women, who supposedly had poured out of a train when an accident on the track had stopped it suddenly. Every one of those women was perfectly groomed--every hair in place, every wave freshly set. I asked the make-up girl whether she'd ever seen women on a train. Her answer was, "I know it's silly, but if I don't do every one of those heads, I get call-down from the front office." In one of the important features which was previewed lately, the feminine star's coiffure and make-up survive a chase through jungles and a tustle with crocodiles.

I think the public are far more intelligent than that. I think things like that make them laugh. In other words they are, unlike the silent picture days, looking for realism. They want to see human beings on the screen, not actresses.

Clothes play a large part in the unreal, Never-Never Land appearance of many actresses. I have seen a young actress playing an emotional scene while she was wearing a hat which transfixed the attention of the audience. All over the theatre there was a rippling whisper, "Look at that hat!" The sincere, straight-forward job she was doing under that hat went for nothing. Some of the outfits worn by our leading women stars are beyond all reason. They're obtrusive and distracting. They form unbeatable competition to the scene that's being played, by making the audience clothes conscious. Somebody once said you never know what a truly well-dressed woman is wearing, you are only conscious of the fact that she is well-dressed.

Don't for a minute think this is all the designer's fault. We, as actresses, are often to blame. Hollywood costume designers are among the best in the world. We all acknowledge that. They naturally have a reputation to uphold, and that reputation is not helped by inconspicuous clothes. No plain sweater and skirt ever made fashion history, or established the designer as a "creator". Yet a dramatic scene may best be played by a woman who is inconspicuously covered, and not modishly gowned.

An actress who has the courage and takes the time to discuss with the costume designer the scenes he has to play, will almost always get full cooperation from the designer. If she wears outfits so elaborate and conspicuous as to detracts from her work, nine times out of ten, it's her fault. I know that I made that mistake fro three years out here. I went in for bizarre clothes, and also for crazy head-dresses. They weren't forced on me. I liked them. People have written me since I have returned to normality in appearance, and have said my clothes and my hair prejudiced them against me for years. That seems proof positive that the public which I believed wanted, demanded, something pretty fancy, were critical and discerning. I was doing them no favor, and myself a lot of harm, by getting myself up like an actress and not a person.

I'm not advocating that we dress ourselves in bungalow aprons. I just finished a picture called The Golden Arrow, which could have been played only in smart clothes, unusual clothes, striking clothes. Mr. Kelly designed some beautiful things, exactly suited to the people we were playing, to the atmosphere of that particular story. I believe that half the interest of that picture for the public will be his clothes.

If an actress knows when to unleash the silver fox, and holds to that knowledge--letting him run free in the Ritz, but keeping him out of the subway, the death house, and the jungle--she'll look more like a person and less like an actress, and furthermore, she'll get full cooperation from Adrian, Travis Banton, Gwen Wakeling and Orry-Kelly.


Bette Davis went on to become a powerful figure in Hollywood history making her mark as the actress who threw vanity aside and was determined to never care how she looked on the screen as long as it resembled the character she played. This helped lengthen her career when most actresses her age in the late 50's and 60's were being put on the shelf. Having played a streetwalker dying of tuberculosis in Of Human Bondage, a sixty year old queen at the age of thirty in Elizabeth and Essex, and an old (and quite plain looking) maid in Now Voyager, audiences were used to getting all types of characters from Davis.
Posted by Sarah at 12:21 PM

Email ThisBlogThis!Share to TwitterShare to FacebookShare to Pinterest
Labels: Davis, Tuesdays with The Screen Guild Magazine