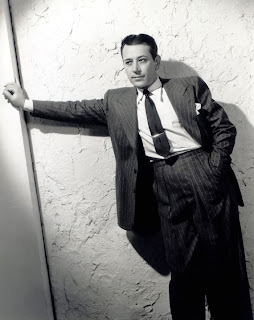 While working together on Each Dawn I Die, George Raft told James Cagney about his unwanted connection with the mob...
"George also told us that when he was working for the clubs, he was really working for the Mob- capital M. They, of course, owned all the New York nightclubs, and were expanding into Florida. In a single night in New York, George would work as many as seven nightclubs, going from one to the other, repeating his very strenuous act in each establishment. Finally he got into a Dillingham show on Broadway that became the climax of his career to that date, and the clubs became of secondary importance.
The Mob, however, had different ideas. They told George he was going to Florida to open their new nightclub down there. George explained that he couldn't because of the Dillingham show, but the tough boys weren't having any of that. He raised hell, said he couldn't do it, but did agree to go down to the train that night to see the boys off for Florida. At the station they grabbed him, took off his overcoat, shoes, and hat- and hid them. 'All right,' George said, 'you win!' He got on the train. But as they pulled into North Philadelphia, he jumped off and ran in his stocking feet through the snow to catch a taxi back to New York. He made the Dillingham show that night and didn't show up in Florida as planned." -Cagney by Cagney
Rafts's involvement with the mob as well as his supreme desire to dance and entertain is a dichotomy that intrigues me. Apparently good friends with known mobsters such as Owen Madden and Bugsy Siegel, I wonder how "involved" with the mob he actually was. From most accounts he is described as a sensitive and generous man, like Cagney and Robinson, the complete opposite of the characters he played so well on screen and gave him his rise to stardom.
Raft began dancing at age fifteen when he and his mother would enter flatfoot waltz contests in hopes of winning the five dollar prize. Since you could not lift your heels off the ground during the flatfoot contest, Raft would cut holes in his heels and insert dimes so that he could glide across the floor easily. He and his mother did very well on the dance hall circuit which later helped Raft to get his nightclub gigs. He once told Cagney and Fred Astaire (who admired Raft's dancing ability tremendously) that in order to dance faster, he would use piano wire to lace up his shoes tightly and numb his feet. He learned later that the reason he would go pale green around his mouth as he danced was because he was suffering from a mild heart attack.
Tonight on TCM! It's a Robert Taylor Tuesday!