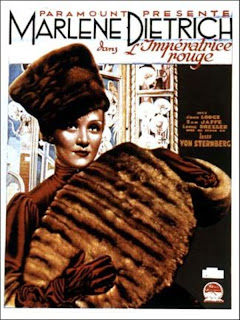 Though The Scarlet Empress is loosely based off the story of Catherine the Great, like most early Hollywood biopics, it should not be used as a lesson in history. Instead it plays out as a vehicle to propagate the vast and outrageous rumors of Catherine's sexual prowess against a very single-minded vision of a Russian Imperial household. Filmed as the Hays code was starting to take serious affect, von Sternberg manages to get away with murder. The use of double entendres, props, and Dietrich's singular smoldering looks into her soldiers 'nether regions" is both blatant and non-stop.
The Scarlet Empress involves Dietrich playing the wide-eyed innocent debutante who is chosen to be Peter III's wife. Before arriving in Russia, Count Alexei (John Lodge or as I refer to him, that guy who looks like Bill Hader in a funny period sketch for SNL) has already admitted his infatuation with her. This will be Catherine's first inkling of what her beauty can do, something her mother is steadfastly aware of and despises. Ironically, this is parallel to how Dietrich's own mother felt about her young daughter as she grew into womanhood.
Once in the Russian court, she is greeted by an Empress Petrovna (Louise Dresser) who sounds more like a Midwestern saloon-keeper hocking her wares than Russian royalty. She meets her soon-to-be husband Peter (Sam Jaffe) who plays a frightening half-wit bent on one day killing her. With orders to produce an heir, Catherine must rely on her own wit and cunning to get the job done since her husband won't touch her. Once her duty is done and Catherine has gained knowledge of the wonders of love making, she embarks on the Holy Grail of sexual conquests and subsequently earns the undying devotion of most of the Russian guard which will aid her in killing off Peter and taking his throne. 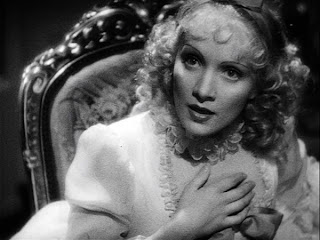 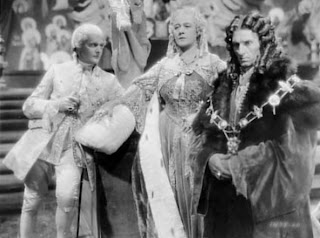 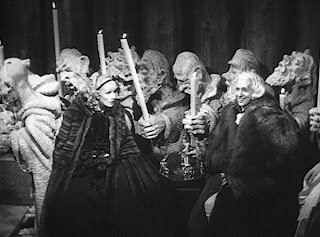 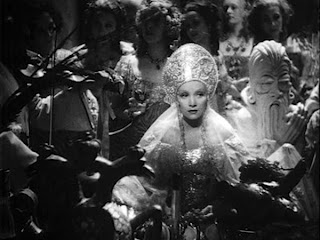 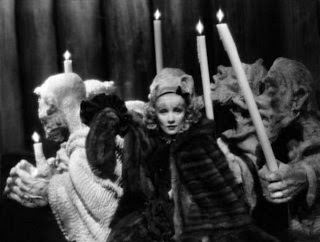 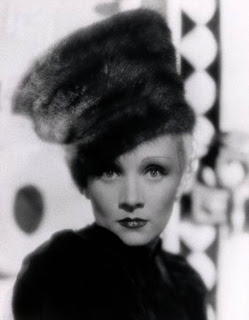 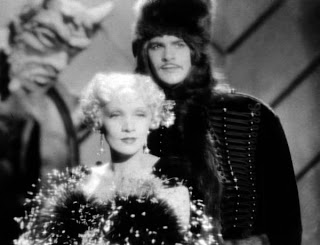 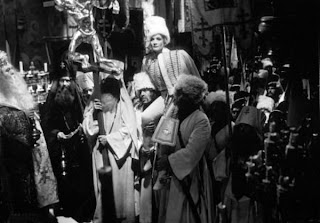 I'm astounded by the strong detail von Sternberg gave to his set and yet let the characters beyond Jaffe and Dietrich fall to the wayside. Then there is his vision of eighteenth century Imperialist Russia that beyond the heavy iconic doors is so very biased and insulting, it makes you wonder what his true feelings for Russia were. Even Dietrich is quoted as saying "All those depressing faces- all over the place! Every time I come around a corner, there is another corpse looking at me. Russia wasn't that bad! I know Jo wants 'decadence,' but isn't he overdoing it?"
The Scarlet Empress, beyond the costumes which Dietrich had a heavy hand in designing, and the bawdy humor, wasn't all that interesting. The story gets lost among the elaborate costumes and oppressive set, puts Dietrich on a pedestal as a beautiful but not very talented star.
Sidenote:
Maria Riva, Dietrich's daughter, plays the young Sophia as a child.
Tonight on TCM!
Small Town Girl (1936) After marrying a drunken playboy, a young girl tries to capture his heart while he's sober. Cast: Janet Gaynor, Robert Taylor, Binnie Barnes, Andy Devine Dir: William A. Wellman
Posted by Sarah at 5:00 AM