The Many Mini Reviews (if you wanna call it that) 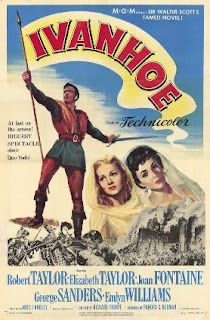 Although Ivanhoe has an interesting plot involving religious persecution, ill-fated love, and royal scheming, I found the trivia on this film more exciting than the film itself.
Scriptwriter Marguerite Roberts was a member of the American Communist Party and in 1951 she was ordered to appear before the House of Un-American Activities Committee. Roberts refused to name fellow members of the party and was blacklisted. MGM received permission from the Screen Writer's Guild to remove Roberts' name from the film because of her refusal to testify to HUAC.
Elizabeth Taylor considered herself to be miscast as Rebecca, and during filming there was talk of replacing her with Deborah Kerr.
Joan Fontaine plays the romantic lead opposite Robert Taylor in this film, which involves the return of King Richard to the throne of England and features Robin Hood as a minor character. Fourteen years earlier Fontaine's sister Olivia de Havilland played the romantic lead opposite Errol Flynn in The Adventures of Robin Hood (1938), a film set around similar events. 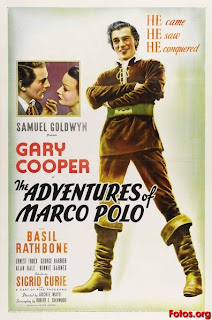 The Adventures of Marco Polo was Cooper's first major flop. There were differences in opinion over how the film should be shot, whether it should be tongue-in-cheek as the screenplay suggested or a serious period piece. After Goldwyn hired and fired his first director, John Cromwell, approached William Wyler and was turned down, he had Archie Mayo take over the project with John Ford directing some of the film's action sequences. Despite Goldwyn's insistence upon Marco Polo being a serious piece, it's mostly a lighthearted film with Basil Rathbone providing the sinister element (something he does so well). However, the plot is mediocre, the actors poorly cast for the races of people they play, and most of the humor isn't really all that funny. 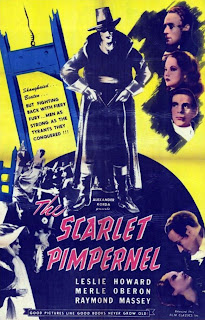 I would suggest everyone watch this just to see Leslie Howard act the fop, it's honestly the best part of the film. And maybe watch it and tell me if Noah Taylor doesn't look like a modern day Raymond Massey? Just a little? 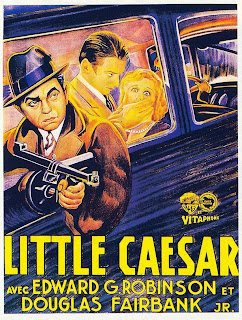 Little Caesar is apparently quintessential Robinson. However, this is the first film I have seen Robinson in a wholly evil light. Loosely based on the life Al Capone, Robinson plays the part of Rico superbly. Like Cagney in The Public Enemy, Robinson manages to stir up hatred for his manner and deeds as a gangster, accomplishing a very effective anti-gangster film. As I watched the film and saw the interaction between Rico and Massaro (Fairbanks, Jr.) I wondered if Massaro was loosely based off of the life of George Raft and gleefully felt like a classic cinema nerd when I read that it was. What tipped me off? Massaro just wanted to dance!
The George Raft tidbit is worthy of another blog entry, which I will post soon. 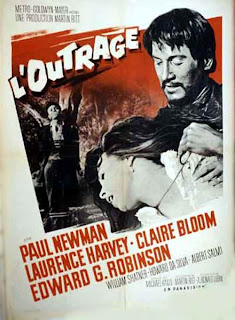 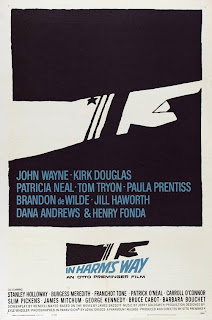 This is the first movie I ever saw Kirk Douglas in. At the time I was too young to understand what he was actually doing to Jill Haworth, I just knew that I didn't like the way he man-handled her and then later thought him stupid for flying into enemy territory. It wasn't until years later that I understood what was going on in the film which made me disliked Douglas even more. However, things change, one matures and realizes that the actor you see onscreen may not reflect how they truly are in real life and I have come to consider Douglas quite a phenomenal actor.
Watching this film again and also recently seeing Hud again, I am also beginning to appreciate and relate to Patricia Neal's particular brand of nonchalant bravado (her best scene in In Harm's Way is when she visits John Wayne at his house and basically puts it all on the line. One phone call to Wayne's roommate, a quite dissipated Burgess Meredith and suddenly the cigarette is being put out and the Keds are being slipped off- spicy!). This film also features the ill-fated Brandon De Wilde who I really enjoyed in Hud as well. Sadly, his talents weren't showcased as much in In Harm's Way. 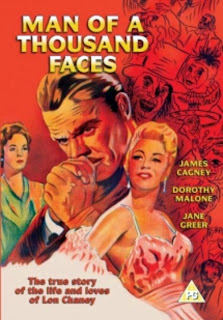 Cagney gives a wonderful if not very detailed accounting of Lon Chaney's life from right before his screen debut up to his death. I just wish there had been more about Lon Chaney the actor not Lon Chaney and his dysfunctional family.