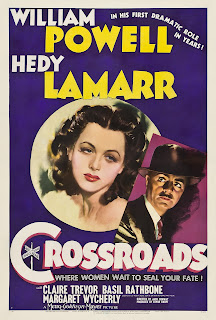 Receiving a mysterious letter on the eve of his anniversary to wife Lucienne (Hedy Lamarr), French diplomat, David Talbot (William Powell) is confused. The letter is addressed to someone named "Jean," and asks for one million francs to satisfy an old debt. Thinking the letter must be a mistake, Talbot decides to get the police involved. When the "money" is delivered, Carlos Le Duc (Vladimir Sokoloff) is arrested. Thus begins a strange court case where Le Duc accuses Talbot of really being Jean Pelletier, a criminal and possible murderer. Le Duc states he was simply trying to retrieve money owed him by Jean. The case explodes when it's revealed by Talbot's friend, Dr. Andre Tessier (Felix Bressart), that Talbot had been in a train wreck in 1922 and suffers from amnesia. To further confuse the case and Talbot, a mystery witness, singer Michele Allaine (Claire Trevor), corroborates Le Duc's story and identifies Talbot as Pelletier, her former lover. However, Talbot is saved when wine salesman Henri Sarrou (Basil Rathebone) testifies to the court that he witnessed Pelletier dies years before after the train wreck.
With a new lease on life and an impending appointment as ambassador to Brazil, Talbot is visited by Sarrou who privately demands one million francs. Sarrou reveals that Talbot is Pelletier and that they had been cohorts in a two million franc robbery, in which Pelletier killed a man, then disapppeared with the money. He tells Talbot that Pelletier suffered a powder burn on his hand when he committed the murder. When Talbot sees a scar on his left hand, begins to suspect that he is Pelletier. The next day, Michele visits Talbot at his office begging for forgiveness about almost giving him away at the trial and warning him about Sarrou. Talbot now suspects a plot between Sarrou and Michele but when she leaves, she shows David a locket with a picture of the two of them together. Michele later visits Talbot and his wife at home with the intent of showing Lucienne the locket. However, David intervenes and later visits Michele still stating he does not believe the accusations she and Sarrou are making. Michele suggests that he go to a certain address and see Pelletier's impoverished mother. David goes to the old woman, who says he is not her son, but her affectionate and unselfish demeanour makes Talbot begins to doubt himself again.

So is Talbot the former Jean Pelletier, former criminal and murderer? Or is Talbot the pawn in a dangerous game? Watch and see! It's a truly great film and quite different from Powell and Lamarr's next collaboration, The Heavenly Body (1944) which is also quite good.


Tonight on TCM! Oooh! This sounds interesting!
Good Sam (1948) A family man helps out people in need and ends up broke in the process.
Dir: Leo McCarey Cast: Gary Cooper, Ann Sheridan, Ray Collins.
Posted by Sarah at 4:29 AM