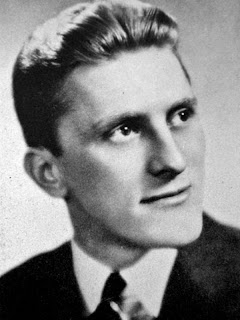 Who photoshopped ﻿the dimple??
Kirk Douglas is an actor that I have come to strongly admire since I started this blog. A versatile artist who's ability to play a cuckholded husband to hero of the screen, Douglas has yet to disappoint me. He is one of the few actors whose very presence onscreen commands attention.
I am happy that TCM will be recognizing his career this month. In association with that, each Tuesday I will review a movie I have seen him in or will see him in- unfortunately, the list below are the very few I have seen in his long list of films. Thankfully, TCM will rectify that this month!
The Strange Love of Martha Ivers (1946)
Out of the Past (1947)
Mourning Becomes Electra (1947)
Young Man with a Horn (1950)
The Bad and the Beautiful (1952)
The Devil's Disciple (1959)
Seven Days in May (1964)
In Harm's Way (1965)
Oscar (1991)
Greedy (1994) 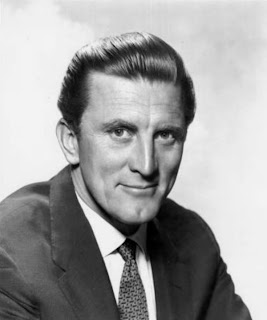 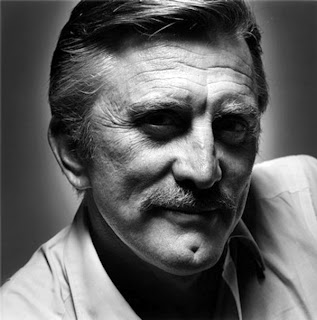 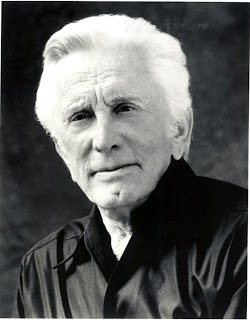 
Lauren Bacall, a former classmate with Douglas at the American Academy of Dramatic Arts in New York, helped him get his first big break in Hollywood by recommending him for The Strange Love of Martha Ivers.


Lonely Are the Brave, is Douglas' favorite of his performances.


Douglas made seven films over the decades with Burt Lancaster, prompting some (me included) to believe the two were collaborators behind the scenes. Not so. However both went on to produce and direct as well as act. Both were also independent players, breaking outside the studio mold.


Douglas was nominated three times for the Academy Award for Best Actor for his work in Champion, The Bad and the Beautiful and Lust for Life.  Though he did not win an Oscar for his individual work, he eventually received an Honorary Academy Award in 1996 for "50 years as a moral and creative force in the motion picture community". He also received the AFI Life Achievement Award in 1991.
Posted by Sarah at 10:26 AM