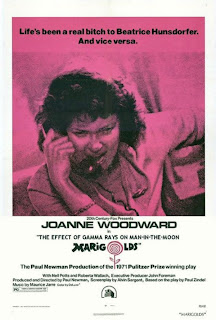 Beatrice Hunsdorfer (Joanne Woodward), a woman ruled by her disenchantment with life, lives in a ram- shackled home with her daughters, Ruth (Roberta Wallach) and Matilda (Nell Potts) and Nanny (Judith Lowry), a boarder. Middle-aged, widowed, and extremely bitter Beatrice is on the constant look out for a step up. If only she had the money and the right opportunity. The presence of Nanny in her home is a constant reminder of what Beatrice is headed for. Ruth, who is epileptic and as negative as her mother, seems destine to make the same mistakes as her. She is at a rebellious stage in life and though she often does her mother’s bidding, she grows to hate her more and more. Alternatively, Matilda, golden-haired, shy and intelligent finds refuge from her mother’s bitterness through her schoolwork and her pet rabbit. She is currently working on a science project involving man-on-the-moon marigolds, which is simultaneously a metaphor for how life affects each person differently. Matilda, in contrast to her mother and sister, chooses a positive outlook on life despite how her mother treats her. Even when Beatrice kills her rabbit, Matilda is still able to see the value in all people.


A moving drama, Woodward is at her most bitter here. In an interview I saw from the 80’s, Paul Newman, who directed his daughter and wife in this film, remarked of all the characters for Woodward to bring home, Beatrice was the one she chose. Apparently, playing this role put a strain on her relationships with husband and daughter. Despite that, Woodward is entirely convincing as the most negative woman I have ever seen on screen. In contrast, Potts becomes more endearing and inspirational. Definitely worth watching.

Tonight on TCM!
Burt Lancaster!
Posted by Sarah at 8:31 AM