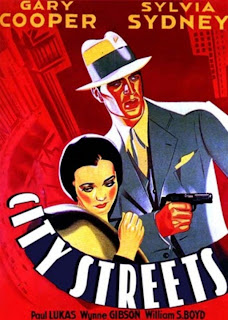 Nan (Sylvia Sydney) is involved with the racketeering business through her stepfather’s Pop Cooley’s (Guy Kibbee) gang. She’s fallen for The Kid (Gary Cooper), a shooting gallery showman and tries to convince him to join the gang. However, when Nan spends a year in prison after being implicated by her stepfather for a murder she didn’t commit, she realizes she needs to get out of the business and take The Kid with her. Unfortunately, The Kid, under the influence of Pop and his mob boss Big Fella Maskal (Paul Lucas), has gotten involved in bootlegging, hoping to earn enough money to get Nan out of jail sooner.
When Nan gets out of the clink she tries to convince The Kid to leave the whole business behind. The Kid is reticent, since the money comes easy and he gets his kicks from high-speed chases. However, Maskal has his eye on Nan and it won’t be long before he and The Kid will have to tangle. 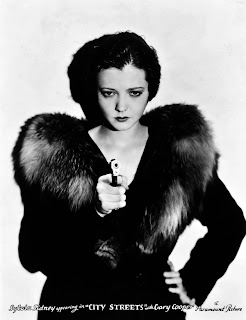 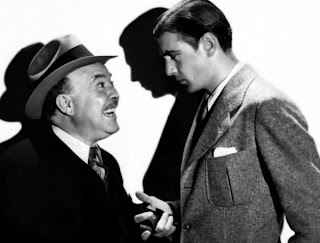 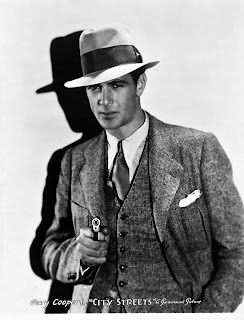 Accordingly, this is the one and only gangster film Gary Cooper did. If you watch it, you will see why. He was totally out of his element as a wisecracking gangster, looking more suitable on a dirt road in the Wild West or being any other regular Joe in a small town. Please note- this makes him no less handsome in a pinstripe suit and fur coat. As for the film, it’s a regular formulaic early thirties drama, with the only bright spots being Sydney and Cooper’s performances.
Fun fact:
The storytelling technique of voice over was used for the first time in film with City Streets. Director Rouben Mamoulian had to fight the studios to have it done- it obviously took hold in a big way.
Thanks to Dr. Macro for the scans!
Tonight on TCM!
The More the Merrier (1943)The World War II housing shortage brings three people together for an unlikely romance.Cast: Jean Arthur, Joel McCrea, Charles Coburn. Dir: George Stevens.
Posted by Sarah at 5:00 AM