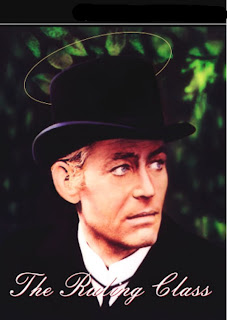 Following the death of Ralph Gurney, the 13th Earl of Gurney (Harry Andrews), Jack Gurney (Peter O'Toole) becomes the 14th Earl of Gurney. However, Jack is quite insane. Claiming to be Jesus Christ, he shocks his family with talk of returning to the world to bring it love and charity. He finds solice sleeping upright on a cross when faced with unpalatable facts such as his true identity. His uncle, Sir Charles (William Mervyn) is set on getting him committed and decides to marry him off to his mistress, Grace (Carolyn Seymour), in hopes of producing an heir who will take on the title. However, his plan fails when Jack’s psychiatrist Dr. Herder (Michael Bryant) is persuaded by Lady Clair (Coral Browne), who hates her husband, to cure Jack. Further, Grace has completely fallen in love with Jack and Sir Charles own son Dinsdale (James Villiers) is his ally.


Herder spends nine months trying to cure Jack and it isn’t unitl the night Grace goes into labor with their first child that Herder makes a break through. He introduces Jack to "The Electric Messiah" (Nigel Green) another patient who believes he is Christ. He uses his “electroshock” to jolt Gurney out of his delusions, showing him that the two men could not both be God and so he must really be the 14th Earl of Gurney. The plan works and Jack eventually does claim himself to be Jack.

Unfortunately he now thinks he is Jack the Ripper. Becoming the very opposite of his Jesus Christ character, Jack is now a violent psychopath with a fanatical hatred of women. He murders Lady Claire when she tries to seduce him and frames the Communist family butler, Tucker (Arthur Lowe), for the murder. He will eventually murder Grace for expressing her love for him. He also plans to take his place in the House of Lords, reestablish the death penalty, and bring Britain back to it’s former glory. Ironically, this side of Jack is more accepted in his class of people and they embrace this side of him.

I love Peter O’Toole. I mean seriously, has he ever been in anything terrible, and if so, was he terrible in it? I think not. The man is an amazing talent and it’s a shame that he was nominated eight times (thus far) and never received an Oscar for a singular performance. I remember the beginning of his speech when he did receive the Honorary Academy Award for his body of work in 2003…”Always a bridesmaid, never a bride…” Apparently he balked at the idea of accepting this honor. He wrote the Academy that he wanted more time to “win the lovely bugger outright”. But is children convince him that it was the highest honor one could receive in his field and so he accepted it.

O’Toole was especially wonderful in The Ruling Class because we get to see two opposing sides of him. Thus the film is lighthearted and funny for the first half, dark and sadistic for the second half, all due to O’Toole’s splendid form of acting. I could listen to the man talk all day and The Ruling Class offers up some hilarious and daring soliliquies. Oh, and the film breaks into spontaneous song and dance at the most unexpected moments. O’Toole sings and dances- it’s fantastic!

Peter O’Toole has been nominated eight times for Best Actor for his roles in Lawrence of Arabia, Becket, The Lion in Winter, Goodbye Mr. Chips (Must see this!), The Ruling Class, The Stunt Man, My Favorite Year (Hilarious!), Venus.
Posted by Sarah at 8:04 AM