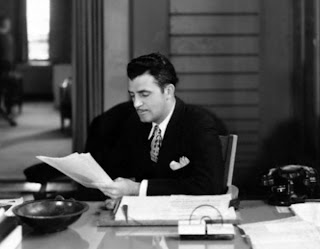 An architect and artist before joining the Edison Studios in 1915 Cedric Gibbons then became an art director for producer Sam Goldwyn, retaining his job when Goldwyn's studio merged with Louis Mayer's company to become MGM in 1924. His success in making set designs eventually gave him the opportunity to lead the MGM art department from 1924 to 1956. Considered one of the most influential art production directors in the history of American film his movie settings invoked the Art Deco and streamline modern style, a welcome distraction to Depression-era moviegoers.
Gibbons was one of the original 36 founding members of The Academy of Motion Picture Arts and Sciences and at the behest of Louis Mayer, he designed the Academy Awards Oscar statuette in 1927, a trophy for which he himself would be nominated 39 times, winning 11—second only to Walt Disney, who won 26.
Gibbons retired in 1956 with about 1,500 films credited to him. However, he was only hands-on with about 150 films, the other credits were a stipulation of his contract with MGM that dictated he receive credit as art director for every MGM film released in the United States, even though other designers may have done the bulk of the work.
Wins for Art Direction
The Rey (1929)
The Merry Widow (1934)
Pride and Prejudice (1940)
Blossoms in the Dust (1941)
Gaslight (1944)
The Yearling (1946)
Little Women (1949)
An American in (1951)
The Bad and the Beautiful (1952)
Julius Caesar (1953)
Somebody Up There Likes Me (1957)
Posted by Sarah at 10:10 AM