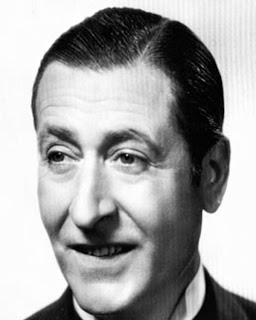 How A Butler Would Raise Money For The Guild
by Arthur Treacher
[Reprinted from The Screen Guilds' Magazine, October 1936]

I am flattered, but impotent!

You put me in a very embarrassing position.

Yu could do no worse if you asked me to be "funny," which, as you know, is an American idiom applied simultaneously to things that are humorous, bizarre, unique and inexplicable.

I have built my (alleged) career on boredom and you ask me to be interesting! Why, even if I were, I couldn't be right now. (If that sentence is not immediately clear to you, read it aloud a couple of times; its meaning will sink in, I'm sure.)

You see, old chap, I have just finished a picture called Under Your Spell at 20th Century-Fox--and for the past five weeks I have been in daily association with one Gregory Ratoff. I feel like a gilded lily. (Remember De Quincey's: "There are degrees of merit, even in cancers.")

I speak with a broken accent, I am race conscious-- (that is, horse-race conscious) and anything I wrote would be quite ungrammatical. Also to be considered are the confessions that I can't think of anything to write of, or on, and if I did, I couldn't think of two thousand words to say it with. For your further information, I customarily conduct correspondence on one-cent postcards. I write a large hand and by cramping my letters, I can sometimes get as many as 40 words on a card. Two thousand words would be equal to how many postcards at 40 words each? Figure it out for yourself. I am certain it would provide for all of my correspondence for many months to come.

However, I am decidedly concerned with a scheme which I think would bring a great deal of revenue to our Guild. I do not know who is the father of the idea. I never originated anything myself in my entire life--but I do feel it's a good scheme, and worthy of our most serious consideration.

Here it is! Stamps to be issued by the Guild and to be placed on sale at all drug stores in the United States at a price to be determined. Any person wishing an autograph or an autographed picture of a screen player should buy a stamp and affix it to a peice of paper or to the photograph. The player can then write his name across the stamp--thus cancelling that particular stamp.

The proceeds of the stamp sales to go to the Guild for distribution among the sick and needy who are members.

I feel that a vast sum of money would come into the Guild--money that God knows it can use. I further feel that those actors and actresses who cannot even go to a public restroom without being asked for an autograph, would not mind it so much (despite their hurry) if they knew they were aiding a good cause.

I know of an actor who in answer to written requests for his photograph sends the following reply:

"I fell deeply honored that you wish for my autograph. On receipt of a money order made payable to either the Actors Fund of America or the Motion Pictures Relief Fund, I shall be glad to send you a personally autographed picture."

He gets many favorable replies.

Of course the press of the country would have to publicize this scheme and it would probably take about six months to get it working.

But I have no doubt that it could be worked out by that mysterious thing called a committee, a thing I have never been on and never shall.

I am very sorry I cannot write an article for you, but all my time is taken up by thinking of the money that is slipping away from the Guild, and by being a butler.

Known best for his role as a snobby butler in several films, Arthur Treacher also has the distinction of lending his name to a popular fast food fish and chip restaurant- Arthur Treacher's. There are probably only 45 chain franchises left and one of them happens to be near where I live. However, I have never actually been inside one- the concept of fast food fish has never seemed appealing.
Posted by Sarah at 7:47 AM

Email ThisBlogThis!Share to TwitterShare to FacebookShare to Pinterest
Labels: Treacher, Tuesdays with The Screen Guild Magazine