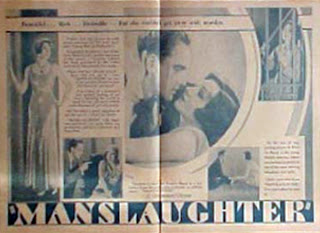 Fredric March plays Dan O’Bannon a poor but honest district attorney who believes there should be but one law for the rich and poor. His beliefs are tested when he must prosecute the lady he loves, one Lydia Thorne (Claudette Colbert) who has committed vehicular manslaughter- a fate that could have been avoided had she obeyed the speed limit. Lydia lives in the fast lane both on and off the road. Easily bored she is always looking for thrills and thinks she’s found one in O’Bannon until he reprimands her for bribing her way out of speeding tickets. When Lydia’s maid Evans (Hilda Vaughn) is put on trial for stealing Lydia’s jewelry, Lydia is so adamant to avoid O’Bannon that she forgets to attend Evans trial and help her get a lesser sentence. After all, the jewelry didn’t mean that much and Evans was punished enough by stealing it for her beau who turned around and abandoned her. When Lydia realizes her mistake, she speeds off to town getting caught in a high-speed chase with the motorcycle cop she eventually kills.
O’Bannon has Lydia sent to prison for what rightly should be a lengthy sentence and immediately quits his job and goes on a bender. Lydia in turn, learns that hard work and humility can be just as rewarding as looking for cheap thrills. Through connections and family money she serves only two years but before she is out, she is visited by O’Bannon who can no longer stay away. Thinking him there to gloat over his victory of caging her, she vows to get even with him. She has a friend obtain a letter demanding O’Bannon’s resignation at the current firm he hope to become a partner with. His reaction is unexpected when she delivers the letter to him and she suddenly realizes that she loves O’Bannon as much as he loves her. 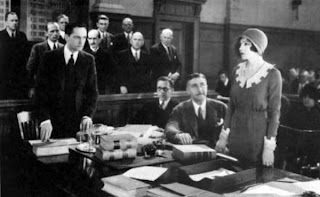 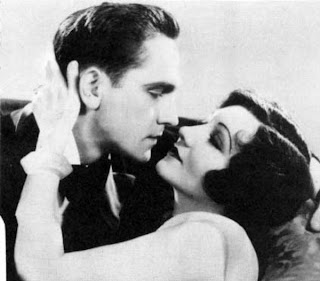 The first of four films they would make together, Manslaughter features March back in his element playing the gentleman and Colbert ably playing the spoiled brat who gradually becomes adjusted to prison life and even becomes popular amongst her cellmates. The accident, the courtroom, and the prison scenes are the most poignant in the film. The film itself helped to boost both Colbert and March’s career. Ironically, the part of Lydia was to go to Clara Bow who could have used the boost. However, her personal problems prompted Paramount to replace her with Colbert.
Posted by Sarah at 5:13 AM