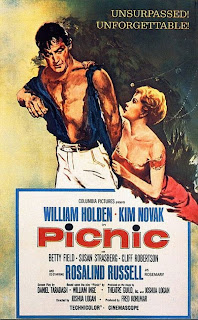 On the morning of a small town Labor Day picnic, drifter Hal Carter (William Holden) arrives in town to visit his old college buddy Alan Benson (Cliff Robertson) hoping to get a high paying job or at least some sort of hand out. Hal is a man full of bravado with a penchant for tall tales and bragging. His biggest desire is to get rich and live the easy life but he’s lazy, impatient and quick tempered- not a good combination for holding down any sort of real work. Underneath it all, there is a really sensitive side to Hal who hasn’t had an easy upbringing and lives in fear of being a loser like his alcoholic father. However, when he meets Madge Owens (Kim Novak), the town beauty queen and girlfriend of Alan, he feels, for the first time, a desire to earn a living honestly, not for himself but for her.
William Inge’s play is full of complex characters. Madge is tired of being known and loved only for her beauty, tired of her mother, Flo (Betty Field) pressuring her to marry Alan simply because he has money. Flo’s a lonely woman who has struggled to bring up two children after her husband abandoned them. She is so blinded by the security that Alan can offer Madge, security that she has always desired, that she doesn’t see that Madge doesn’t love Alan and that her younger daughter Millie (Susan Strasberg) is suffering from all the attention Madge is getting. It’s hard being the younger, tomboy sister to the town beauty. Millie feels like an ugly duckling and she sees in Hal a kind man who gives her an ego boost by being her date to the picnic. However, that much needed attention falls to the wayside when Madge comes around. Hal only has eyes for her. Then there is schoolmarm Rosemary Sidney (Rosalind Russell), a renter in the Owens home. She’s a self-proclaimed spinster who brags much about the love she would have had if she weren’t so independent. She’s as full of bravado as Hal is and after getting drunk at the picnic and giving Hal a piece of her mind, she begs her longtime beau Howard (Arthur O’Connell) to marry her, admitting that she lives a miserable existence. Long suffering Howard does not know how to handle this side of Rosemary. She’s always been so upright, prudish, and fiercely independent. He’s come to count on that and is settled in his own ways. And lastly there is Alan, the rich boy in a small town with responsibilities to his father’s company and a reputation to uphold- at least according to his father. But Alan loves Madge, wants to marry her and doesn’t care how his family feels about it. 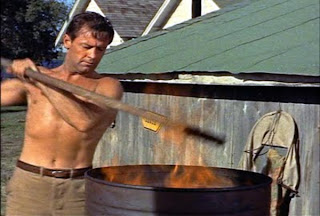 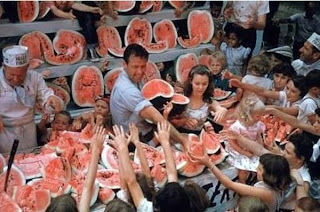 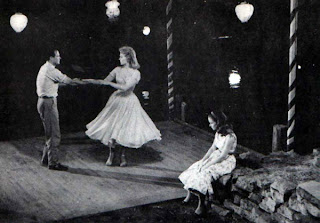 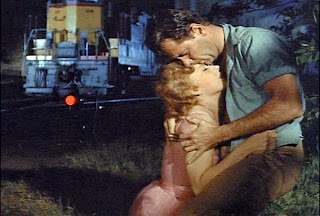 Adapted from William Inge's Pulitzer prize-winning play, Picnic, a box office draw and star -making vehicle for Kim Novak, was highly acclaimed and considered quite racy for 1955 but in my opinion, quite disappointing. It's one of those movies that was ill adapted for the screen, playing more like a play than a film. Despite its potential the movie is full of overdramatic moments seriously overacted and slightly embarrassing to watch. Disappointing too is Holden's Hal Carter, who is much like Holden's Joe Bonaparte from Golden Boy (1939), tempermental, desperate, and at times downright childish. Though this would have been a good part for Newman (who performed this role onstage), Brando, or Dean- it's definitely not a part suited for Holden who was too old and in my opinion, established for the role. When I see him in films like Stalag 17 (1953), Executive Suite (1954), and The Bridges at Toko-Ri (1954) I have to wonder who thought it was a good idea to put him in a vehicle like Picnic...or who said these pictures would really sum up the film. What? 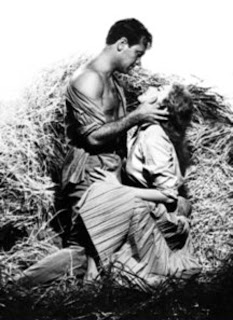 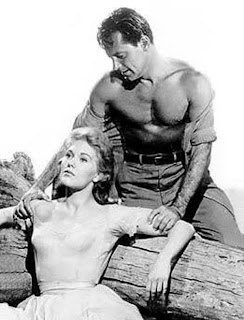 As for Kim Novak, besides Vertigo (a film I believe she is best known for), this is the only film I have seen her in. I think she is better known for her beauty than her acting, Picnic helped prove that. Her super wicked mullet caught more of my attention than anything else. 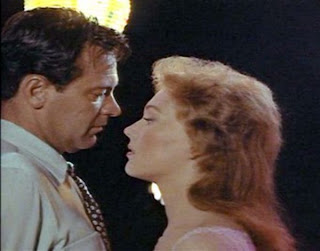 Tonight on TCM!
The lovely Lauren Bacall!
Posted by Sarah at 5:00 AM