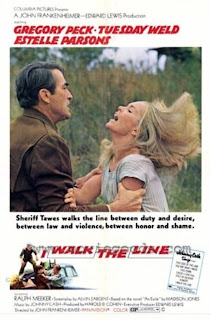 This is my favorite Gregory Peck role yet, simply because his emotional range in this film goes beyond the calm exterior that is ever present in the few films I have seen of his. Namely, The Valley of Decision, Spellbound, The Yearling, The Paradine Case, The Great Sinner, Man with a Million, Designing Woman, and To Kill a Mockingbird. He gets close in Spellbound and The Great Sinner but I think the key element in his Tawes character is the complete lack of concern over leaving his family for a very young girl. It adds richness to Peck's range, this lack of compassion. When we should despise Tawes for succumbing to his baser needs and ignoring his wife's pain, Peck inspires sympathy. There is no discussion of the mistakes he’s made in life, the regrets he harbors, or his reason for doing what he’s doing with Alma (Tuesday Weld), the words are not necessary, it’s written on his face, in the way he moves. He desires Alma but not for the same reasons Mrs. Stone in The Roman Spring of Mrs. Stone succumbs to her Paolo, he wants to be Alma’s protector, her mentor, her everything. Instead of feeling good about Tawes ultimately being denied by Alma, to the point of violence, Alma is considered the aggressor, the enemy, despite how young and innocent she seems.
The storyline is a simple one as is the background of the film. Tawes and Alma live in poor country, people’s lives are written on their bodies. Despite the lushness of the land, the people are withered and sluggish. We get a good dose of this in the opening credits with ordinary country folk being filmed in their natural habitat. It’s a great set up for the parallel plot of the film. The arrival of Federal Agent Bascomb (Lonny Chapman) to Tawes small town of Sutton, Tennessee in search of moonshiners causes a riff between Tawes and his deputy Hunnicutt (Charles Durning). Tawes believes that whatever helps the people get by shouldn't be hunted down and destroyed whereas Hunnicutt is out for blood and maybe a little recognition.
Alma's father and older brother are moonshiners, force Alma to seduce Tawes as a way to gain legal protection. When both Tawes wife and his deputy begin to suspect what is going on, things start to spin out of control. 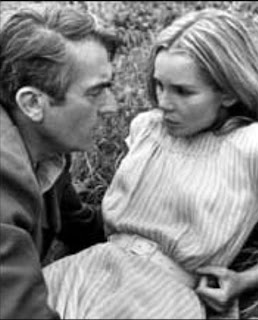 Tonight on TCM!
Katharine Hepburn!
Posted by Sarah at 4:50 AM

Email ThisBlogThis!Share to TwitterShare to FacebookShare to Pinterest
Labels: Chapman, Durning, I Walk the Line, Weld