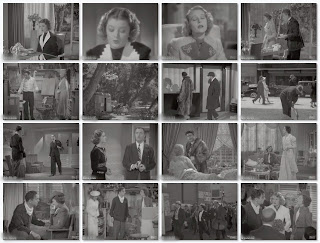 Loy and Powell are at it again! Double Wedding is the story of Margit Agnew (Loy) who is the overbearing older sister who unwittingly controls the lives of all those around her. Namely her younger sister Irene (Florence Rice) and her fiance Waldo (John Beaver). Tired of how cowardly Waldo is when Margit is around and worried that her sister is planning her life into misery, Irene strikes out and uses Charlie Lodge(Powell) her acting coach as a means for escape.
Unbeknownst to Charlie, he is now a part of a false love triangle with Waldo being in love with Irene, Irene is pretending to love Charlie, and Charlie being smitten with Margit. After Irene tells Margit that she is going to marry Charlie and not Waldo, Margit strikes a deal with Charlie, if he stays away from Irene, she will sit for one of his portraits. Charlie, now aware of what Irene is up too, secretly tries to bolster Waldo's courage to win Irene over, and win Margit over himself.
Margit is so stubborn however, that it takes Charlie almost to the moment he is about to marry Irene for her to speak up. There in his trailer full of strange spectators and finally a drunken but brave Waldo coming to Irene's rescue does Margit admit her love for Charlie before they are both knocked unconscious by the ensuing riot caused by the spectators.
The movie is full of the Loy and Powell chemistry complete with cutting barbs, innuendo, and just plain hilarious physical comedy. Loy and Powell never disappoint!
Tonight on TCM!
Bells Are Ringing (1960) An answering service operator gets mixed up in her clients' lives.
Cast: Judy Holliday, Dean Martin, Fred Clark, Eddie Foy Jr. Dir: Vincente Minnelli
Posted by Sarah at 4:47 AM