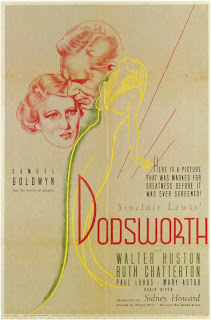 Dodsworth, hands down, is the best movie I have seen Ruth Chatterton in to date. Ironically Dodsworth is her most highly regarded film yet, it is not from the pre-code era that defined most of Chatterton’s film career. Though she is not a particular favorite of mine (I have only seen her in the more mundane of the pre-code quick flicks she did) I have never discounted her as being one of those actresses that successfully defines the independent woman. Or perhaps Female and Frisco Jenny is much on my mind as I write this. Up until this point her acting has not particularly inspired me. If possible, she speaks faster than her peer James Cagney and has a range of emotions one can measure by her facial expressions, meaning few. However, she has a radiant smile and a lively arch charm that lures you in and makes you realize that at least she isn’t horrible to watch.
Dodsworth is no exception to her range, she is still Chatterton, but she is so charmingly loathsome as the social reaching Mrs. Dodsworth, that you can’t help making a distinction between this role and her others. Quite simply, it was a good part and she delivered it admirably. It should be noted that Walter Huston was nothing to sneeze at either.
Without delving too far into the movie and making this a spoiler entry, Dodsworth is, in the simplest terms about an older married couple dealing with life in the retirement age. With their only child now married, Dodsworth has given up his business to enjoy the money he spent his life to earn. Ms. Dodsworth, still young looking and energetic, is bored with the same routine of life in a small town has convinced her husband to take her abroad. The instant they are on the boat, Ms. Dodsworth is changed and throughout the film she progressively gets worse. Dodsworth’s reaction to her change is at times hilarious, certainly indulgent but ultimately life changing. With wonderful performances by Mary Astor and Spring Byington as well, I would definitely recommend Dodsworth to anyone. It is a classic essential.

Tonight on TCM!
Spotlight on Under the Sea! Let's get fishy!