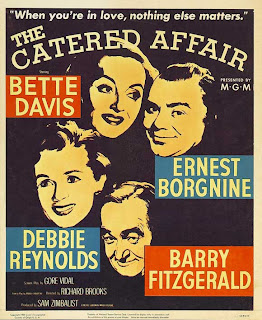 There is a notable stiffness to ’ acting in her later career. Her facial expressions are limited, more militant, harder, bored even. An already perfected stoney expression became rote. Her dialogue is mostly barked not spoken and punctuated by long thoughtful pauses. The Catered Affair is no exception as plays Agnes Hurley the much disappointed hausfrau to Tom Hurley (Ernest Borgnine), a cab driver.
The film kicks off with Hurley and his buddy finally about to achieve a goal they have scrimped and saved for over twenty years for, their very own taxi business. With an agreement to meet on Sunday and pool their savings ($4000.00 each) to buy a cab, Hurley returns home where it’s announce by his daughter Jane (Debbie Reynolds) that she is engaged. In order to take advantage of the use of a friend’s car and go on a honeymoon, Jane has decided to have a small wedding with only the immediate family, planned for the next Monday.
All is coherent until Ralph’s parents show up for dinner that night and offer up as a wedding gift a rent-free apartment for a year, then expound on the marriages they provided for their own daughters. This throws Agnes into a tizzy as she realizes that she and her husband haven’t done one thing for their children that would make them remember their parents fondly. They have spent most of their lives just trying to make it by and in the process have had to deny their children luxuries. Now Agnes is determined to give her daughter a big wedding and she doesn’t care about the cost, she wants her daughter to have this one thing, a thing that was denied her when she got married. 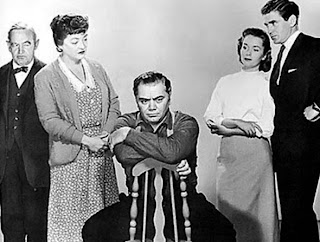 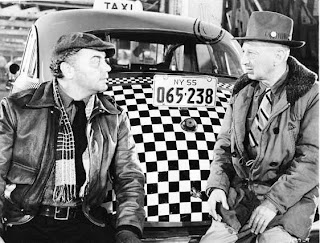 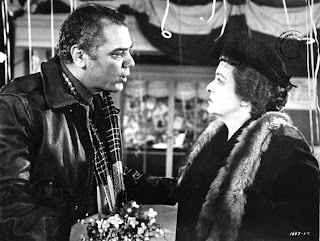 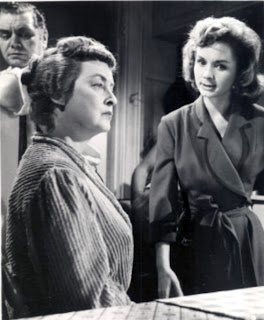 Fraught with tense and revealing scenes that peel back the layers of a disappointing marriage and the effect on family and friends when ambitions and desires are put on the table, The Catered Affair is a tightly compacted and absorbing film. Barry Fitzgerald as Agnes' brother Jack and his friend Ms. Rafferty (Dorothy Stickney) offer up a little comic relief with the real star of the film being Ernest Borgnine, an actor I have come to esteem much. As a person who has not yet seen Marty and has heard of the difficulties Borgnine had winning roles due to his looks, I believe that though he wasn’t an ideal leading man, he was certainly something more than just a character actor.

Tonight on TCM! Ooooh! Wonder how this will be?
The Damned Don't Cry (1950) Fed up with her small-town marriage, a woman goes after the big time and gets mixed up with the mob. Cast: Joan Crawford, David Brian, Steve Cochran, Kent Smith Dir: Vincent Sherman