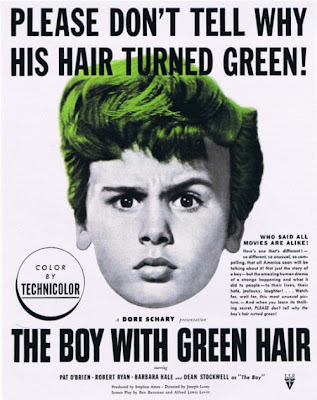 Peter Frye (Dean Stockwell) has problems. Besides being disillusioned about his parents still being alive and being passed from one relative to another, he now has to deal with an issue that isn’t so easy to hide-- green hair.
The movie opens with a completely shaven Peter refusing to speak to the authorities about where he has run away from. The police call in a Dr. Evans (Robert Ryan), a child psychologist whom Peter tells his story to. Peter recently moved in with an understanding retired actor named Gramps (Pat O'Brien). He starts attending a new school and living the life of a normal boy until his class gets involved with trying to help war orphans in Europe and Asia. Through this aid Peter realizes via another classmate, that he too is a war orphan. The realization about his parents, his work with the war orphans and constant chatter from adults about another possible war leave Peter troubled. To make matters worse, he awakens the next day with green hair, prompting him to run away after being taunted by the townspeople and his peers. While crying in the woods he is approached by the orphaned children whose pictures he saw on posters. They tell him that he has green hair for a good cause, that he can use it to make a difference and get a message out to the people that war is dangerous for children. Peter leaves with a new sense of determination and starts to deliver his message but the townspeople are not buying it and even Gramps encourages him to shave his head so that his hair might grow back normally. Peter eventually agrees but after the deed is done he runs away. After Peter tells his story to Dr. Evans he asks the doctor if he believes his story. Dr. Evans tells him he does not because Peter doesn’t even believe his own story. He advises him that if he is going to deliver an important message, he must believe in it and not give up so easily when he comes up against obstacles. Peter returns home determined that his hair will grow back green and that he will believe in the message he needs to deliver. 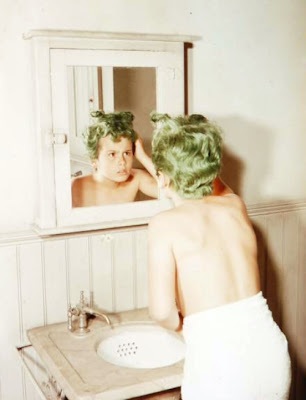 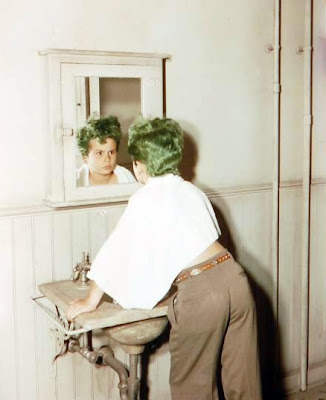 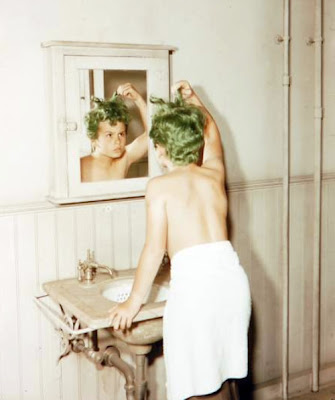 Pictures courtesy of LIFE magazine
I don’t know what prompted me to rent this film despite the fantastical aspect of a boy with green hair. Nothing in the description of the film gave me a clue that it was an anti-war parable. Though I admire director Joseph Losey’s approach to a plea for tolerance, like most people and maybe even more so for a generation entering the Cold War years, I could see the futility of trying to change the world by making individual stand out and deliver a message of peace. Sadly for Losey, he learned that as well, becoming one of the blacklisted directors of Hollywood in 1951 for his Leftist leanings, he was forced to flee to Europe. Though Losey resented his alienation from his country, he acknowledged its positive aspects. Rather than end up a jaded Hollywood director, he was an outsider just like Peter, a position that was to inspire, as well as frustrate, his work.