He played Romeo to her Juliet, Antony to her Cleopatra. And not only on the stage. Off-stage, Laurence Olivier and Vivien Leigh carried on a tumultuous twenty-year romance that rivaled any they ever portrayed in a play. Dubbed 'the King and Queen of the theater' by fellow actor John Gielgud, they were truly show business royalty, as dazzlingly glamorous a couple as had ever captured the fancy of an adoring public. He was Heathcliff. She was Scarlett O'Hara. That two such romantic icons should also be husband and wife seemed like Hollywood fantasy. In the end, that fantasy was too good to be true. 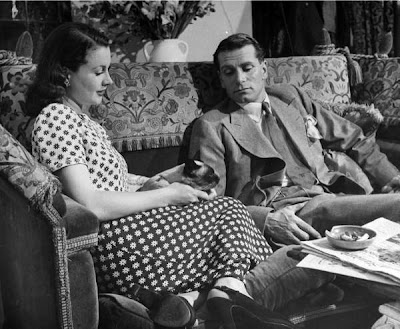 It was love at first sight, at least for Leigh. As a 22-year-old starlet in 1935, she saw Olivier on the London stage and was instantly enthralled by his brilliant star power-and brooding good looks. 'Someday I am going to marry Laurence Olivier,' she told a friend, with the same conviction she'd later announce, 'I shall play Scarlett O'Hara' - years before landing the part. Such bold declarations were typical of the headstrong Leigh, who always knew what she wanted, and usually got it.
For Olivier, the attraction was almost as immediate. He too had first seen his future love on the stage and had been struck by her 'magical looks' and 'beautiful poise.' But, he wrote in his memoirs, 'she also had something else: an attraction of the most perturbing nature I had ever encountered.' Soon, a mutual friend introduced the two actors, beginning a professional acquaintance that spontaneously combusted into full-blown passion. There was only one complication. Make that two: At the time, both Olivier and Leigh were already married. 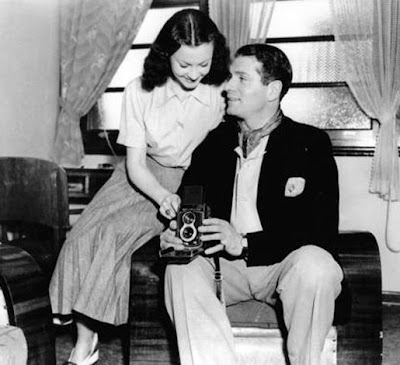 Olivier had wed fellow actor Jill Esmond in 1930. Even as he was falling in love with Leigh, his wife was carrying his first son, Tarquin. Leigh, meanwhile, was already a mother. She had married barrister Leigh Holman in 1932 - at only 19 - and had given birth to her daughter Suzanne within the year. Both Olivier and Leigh had thought themselves happily married, but after meeting each other, they realized how much romance they'd been missing. Olivier would call their attraction 'fatefully irresistible.' After two years of 'rapturous torment,' they gave into fate and ended their marriages. 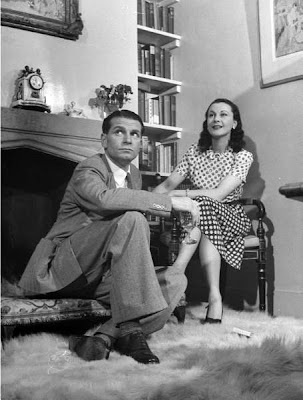 'The great passion and adoration these two had for each other was truly electric,' once recollected Sunny Andrews, Vivien Leigh's long-time secretary. 'The way he looked at her and vice-versa - their responses were pure delight - almost as if, 'Wait until I get you alone' and 'Yes, love, how soon?''
Yet it was more than sex that charged this magnetic attraction. Quite simply, these two completed each other. Olivier inspired Leigh; he was her hero, her mentor, her soulmate. He shared her artistic aspirations, and moved her to aim even higher. In turn, she inspired him. This beautiful, sensual, witty woman not only sparked his intellect and libido, but also his personality. 'I never saw such a transformation,' said one Olivier chum. 'He went from a rather somber chap to an upbeat bon vivant.'
Having discreetly lived together for the three years it took to finalize their divorces, Olivier and Leigh were finally free to marry in 1940. They slipped away for a civil ceremony, witnessed only by friends Garson Kanin and Katharine Hepburn. They next day, however, they announced their nuptials to the world, with a fanfare befitting a king and queen. By then, Leigh's Gone With the Wind and Olivier's Wuthering Heights had made them international stars, and they seemed to thrive on the attention. Portraying lovers on stage only seemed to intensify their offstage ardor. 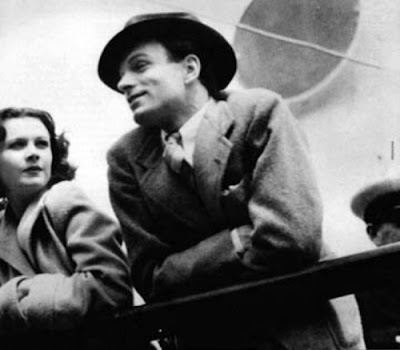 The early '40s were the happiest time for the Oliviers. Not even the outbreak of World War II could slow them down. Though Olivier served in the Royal Air Force, training fighter pilots, he and Leigh stayed active in the theater, even entertaining Allied troops on a tour of North Africa. In 1944, the couple bought a sprawling country home that became a weekend retreat. Here, the king and queen held court at lavish dinner parties. They guest list typically included such theatrical luminaries as Noel Coward, Orson Welles, and Marlene Dietrich; the revelry often lasted until dawn. 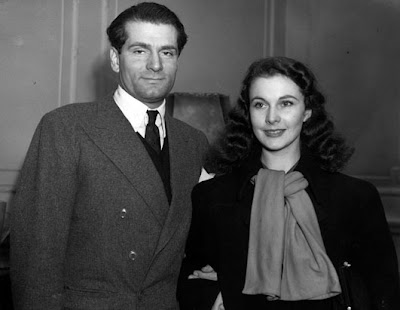 But their domestic bliss was short-lived. The years that followed the war brought changes, especially for Leigh. Always in delicate health, she habitually worked herself to exhaustion, and as early as 1944, this began to take its toll: While filming Caesar and Cleopatra, Leigh fell and suffered a miscarriage that left her deeply depressed. The next year, she was stricken with tuberculosis, in the midst of her triumphant stage return in The Skin of Our Teeth. A long convalescence followed, during which Olivier began to conquer the theater world. While he was wowing London with the classics, she could only sit home. 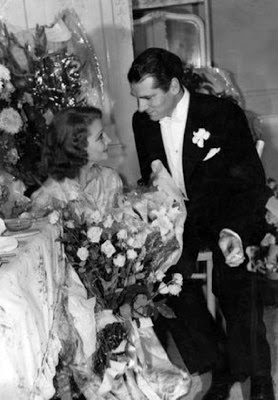 Eventually Leigh returned to work, but she never regained her stature as Olivier's superstar equal. When he was knighted in 1947, she fell further into her husband's shadow. This was more than a blow to her ego. Vivien's fading fame cut right to her heart. 'She had to be successful because she had so much regard for Larry,' Olivia de Havilland once said. 'She wanted to measure up…to keep his admiration and his love.'
But even if Leigh could have settled for second billing in their marriage, fate and her own frail health intervened. In addition to her physical ailments, Leigh began to suffer serious mood swings that were later diagnosed as manic-depression. One night she'd be the hyper-active life of the party; the next she'd be lost in dark clouds of despair. With their once idyllic home life in upheaval, Olivier increasingly sought refuge in his work at the theater.
Still, he tried to include her in his success. A 1948 tour of Australia brought them back together on stage, yet Olivier came home feeling he had 'lost' Leigh. Within months she told him she didn't love him anymore. 'I felt as if I had been sentenced to death,' Olivier wrote. 'The central force in my life, my heart in fact…had been removed.' 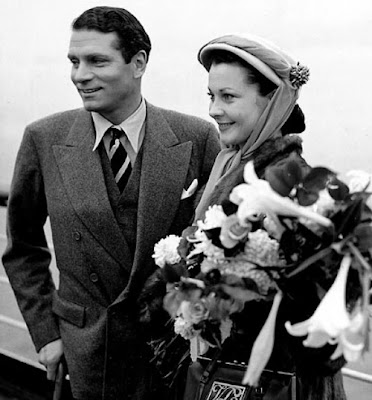 And yet they stayed together more than ten years afterward, as if clinging to the memory of the great passion that had flamed so brightly and then burned out - as if each realized that the other had indeed been the love of a lifetime. Then too, they were bound by a public who still saw them as the King and Queen. So they carried on as 'the Oliviers,' successfully performing together on stage, while living ever more separately at home. 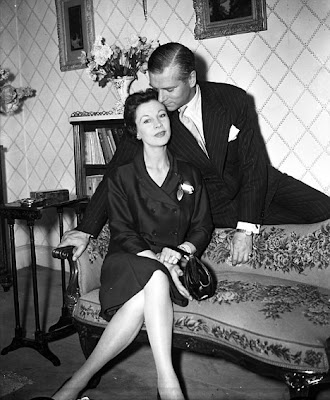 In the early '50s, Leigh's mental health grew more unstable. There were periods of heavy drinking, and an affair with actor Peter Finch. Eventually, in 1953, she suffered a breakdown, and spent time in a mental hospital. There, she received the first of the many shock treatments she was to undergo throughout her later years. Home after that first treatment, Leigh seemed a stranger. Feeling increasingly helpless, Olivier buried himself in his work.
Their marriage would endure another miscarriage, more bouts of manic-depression, and less meaningful opportunities for the now middle-aged Leigh. Finally, in 1957, it was Olivier who could no longer continue. By then he'd become involved with actress Joan Plowright. He left Leigh in 1958; they divorced in 1960. Olivier married Plowright three months later. 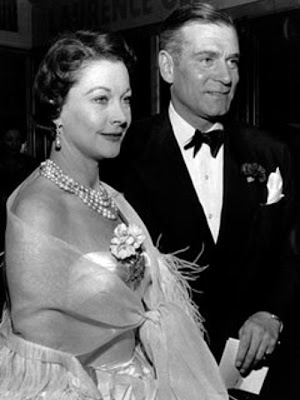 'Until her dying day, I don't think Vivien believed Olivier was beyond recall,' said a colleague who knew her in later years. Still, life did go on without Larry. During the sixties, Leigh revived her career, starring on screen in The Roman Spring of Mrs. Stone (1961) and Ship of Fools (1965), and even winning a Tony in the Broadway production of Tovarich (1963). She also found romance with actor Jack Merivale, a friend since 1940. But her manic-depressive interludes never really left her, nor did her incipient TB, which fatally flared up again in 1967. She died at her home on the night of July 7. Hearing the news in his hospital room, where he was being treated for cancer, Olivier immediately discharged himself, and rushed to Leigh's deathbed. 'I stood and prayed for forgiveness for all the evils that had sprung up between us,' he later wrote. 'It has always been impossible for me not to believe that I was somehow the cause of Vivien's disturbances.'
But if Leigh had ever shared that belief, she had long since forgiven him. She would go to her grave still loving Olivier, telling writer Radie Harris shortly before her death that she'd 'rather have lived a short life with Larry than face a long life without him.'
Olivier would outlive Leigh for 22 years, during which he remained devotedly married to Plowright. Yet in the end, it was clear that he'd never gotten over Vivien either: In 1986, a visitor to his home found the 80-year-old Olivier sitting alone, watching Leigh in an old film on television. 'This, this was love,' he said, in tears. 'This was the real thing.'

Guess ole Laurence was a double dipper too since he married wonderful actress Joan Plowright.

Email ThisBlogThis!Share to TwitterShare to FacebookShare to Pinterest
Labels: Leigh, Olivier, The Olivier-Leighs