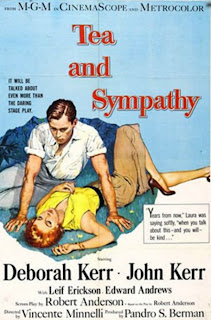 Writer Tom Robinson Lee (John Kerr) attends his 10-year reunion at Chilton boarding school and reminisces about his last year there. Intelligent, shy and sensitive Tom is not like the other boys, preferring to remain alone and play what they term “long hair” music. Secretly he has a crush on Laura Reynolds (Deborah Kerr), the relatively new wife of dormitory headmaster Bill Reynolds (Leif Erikson). Tom sees in her a mother figure that has been denied him since age five when his mother left. Since then his father Herb (Edward Andrews) has kept him in a series of boarding schools. Hoping that Reynolds, who is also a former classmate and alumni of Chilton, can make a man out of his son, Mr. Lee has no qualms about what kind of drastic measures need to be taken to do so. The situation is exacerbated when, in an attempt to spend more time with Laura, Tom is caught in a sewing circle on the beach by some of his classmates earning him the name “Sister Boy Lee”.  Reynolds, who all the boys look up to as an example of masculinity does nothing to stop the vicious rumors that begin with such name calling. Laura witnesses what’s unfolding and tries to get her husband to me more sensitive and mature about the situation. However Reynold’s demands she keeps a polite distance from the situation, claiming she is babying Tom. This only another example to Laura that Reynolds is pulling away from her since they’ve been married. She can’t seem to draw his attention away from the male students, even to the point where he has invited some of them on their vacation. 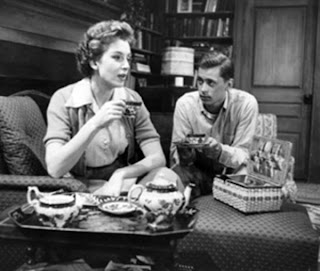 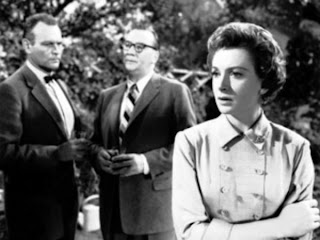 Soon the boys begin to taunt Tom even though his roommate, Al Thompson (Darryl Hickman), a star athlete, comes to his defense. When his father visits to watch his tennis match, the only sport Tom likes, he hears the boys mocking Tom. Though his son is winning the match, he leaves it to go and watch the baseball team much to Tom’s disappointment. Later Mr. Lee encourages his son to be more manly by cutting his hair in a crew cut and urging him to interact with the soda shop waitress Ellie Martin (Norma Crane), as the other boys do. Before he leaves, Mr. Lee visits Reynolds and expresses shame that Tom is not like the other boys.  Laura overhears them discuss the evening's bonfire, at which new boys, wearing pajamas, are chased by the older students who will attempt to rip the clothes off of them (insert irony here). Mr. Lee and Reynolds hope the boys will be harder on Tom as a sort of lesson. Laura attempts to intervene and tries to explain to Reynolds that some boys, like her first husband who dies in the war, are simply more sensitive. This only serves to infuriate Reynolds who is becoming more and more upset by Laura’s attention to Tom. Mr. Lee’s visit is further damaging when he realizes that Tom will be playing a female role in the school play. Demanding that he quit the part, Tom must call the director immediately. 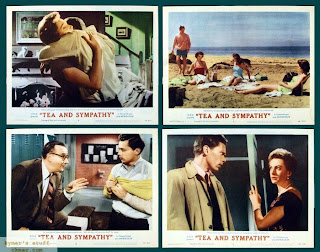 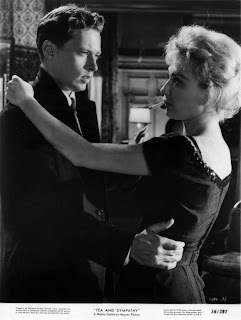 After the bonfire when the the boys march Tom out to the field, but refuse to touch him mocking that he’s too unmanly for such sport, Al, in an attempt to get the horrible proceedings over, rips off Tom's top, prompting the others to join suit. The next day Al receives a phone call from his father demanding that he move to another dorm next semester. When he tells Laura, she first threatens to start a rumor about him but then apologizes for her action. However, Al can see her point of view and attempts to teach his friend how to appear manlier, but after they both decide that may not be enough, Al suggests that Tom visit Ellie, whose reputation with the boys at school will help him gain the boys camaraderie. When Laura hears Tom making a date with Ellie, she tries to detain him knowing that he finds the whole situation highly distasteful. Tom impulsively kisses her, but runs off when Bill and some boys return early from a rained-out weekend mountain climb. He goes to Ellie's, but is repulsed by her easiness. As they dance, she remarks on how soft his hands are prompting her to recall out loud that he has the nickname “sister boy Lee” and starts laughing at him. In desperation, Tom grabs a knife from her kitchen drawer to attempt suicide but Ellie gets her her neighbors to detain him and call the campus police. The next day Mr. Lee arrives proud that his son was caught in a woman’s room but soon learns from Reynolds what really transpired. Laura, sick of the situation, tells her husband that she blames him for not stopping the bullying of Tom and again insists that real men can be gentle and considerate. She claims he has done nothing but pull away from her since they have been married and admits that she tried to get Tom to “prove” himself with her. Reynolds, disgusted by this, tells her that what she really wants is to mother a boy rather than love a man and storms off. Laura then goes in search of Tom and locates him in the woods. As they kiss, she says, "Years from now, when you talk about this, and you will, be kind." 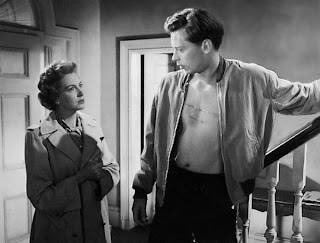 Back to the present, Tom goes to visit Laura but only finds Reynolds living alone. Reynolds gives him a letter from Laura and Tom reads that she appreciates the novel he wrote about their relationship, but states she sacrificed her marriage for Tom because he was the easier problem to fix. Despite this, she reassures Tom that she has kept her affection for him. 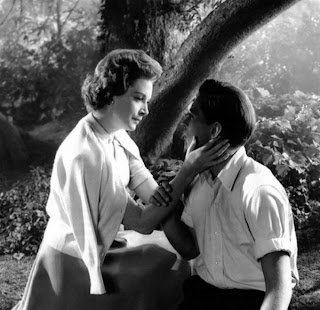 Minnelli later claimed that he was the director to film a story about homosexuality. In order to get the story filmed under the prevailing code, a few changes were made. The major change being that the word homosexual could not be used. I think this helped further the message of the film- that innuendo and rumor can ruin. stated that his goal was for Tea and Sympathy had more than a sexual angle, it was also about judging people by their appearance and the power of conformity no matter the cost. Though a bit histrionic at moments, I thought Deborah Kerr and John Kerr, who reprised their stage roles for this production, did a very admirable job. Kudos to directors like Minnelli who weren’t afraid to tackle such sensitive subjects.
Tonight on TCM!
55 Days At Peking (1963) An American major leads the defense against Chinese revolutionaries in 1900 Peking. Dir: Nicholas Ray Cast: Charlton Heston, Ava Gardner, David Niven.
Posted by Sarah at 6:54 AM