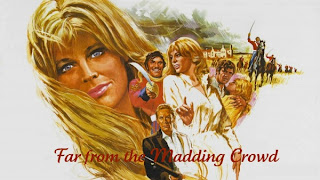 After turning down her neighbor Gabriel’s (Alan Bates) offer of marriage, Bathsheba (Julie Christie) leaves her aunt’s home to inherit her uncle's farm in Weatherbury. Gabriel in turn has misfortune with his own farm and shepherding attempts and must go to London to find work on a richer landowner’s property. Coincidentally he ends up meeting Bathsheba again when he happens upon a dangerous fire on a farm and leads the bystanders in putting it out. Bathsheba hires Gabriel on as a shepherd and states that she will take a larger hand in running the farm herself. While cleaning out her uncle’s house she comes across a pretty Valentine that she impulsively sends with the mesaage “Marry Me” to William Boldwood (Peter Finch), the nearby landowner and a man reputed for having no “passionate parts. Thinking she is serious, Boldwood comes to propose and Bathsheba, admitting it was sent in jest, promises to consider his offer. However, in the meanwhile, she falls in love truly for the first time with Frank Troy (Terence stamp), a dashing cavalry officer. Unaware that Troy should (and almost did) marry Fanny Robin (Prunella Ransome), a maidservant on the farm who is now pregnant with his child, Bathsheba proposes marriage to him. Almost immediately, it becomes evident that Troy has no desire to be a farmer causing tension among the farmhands and gambling away what little money the farm produces. When Fanny reappears having gone missing after their wedding mishap (she left him waiting at the altar having been mistaken about the church they were to be married in) Troy promises to bring her money to the workhouse she has been at in order to survive. Unfortunately he is too late and left waiting again as Fanny is taken back to the farm in a coffin that’s been inscribed with chalk: Fanny Robin and child. Gabriel, upon seeing this, wipes away the evidence but Bathsheba already suspects the worse. Later that night she opens Fanny’s coffin and Troy finds her putting flowers around fanny’s head. Filled with remorse and not listening to Bathsheba’s pleads that she is the better choice, Troy proclaims that Fanny is the only woman he has ever loved and leaves her. Troy is assumed dead with his clothing is found near the ocean prompting Boldwood to propose again. Bathsheba, though she does not want to, promises to marry Boldwood when Troy is declared legally dead which will take six years time. However, Troy reappears at the holiday party right after Bathsheba makes her promise and claims he is there to take her home. But Boldwood, completely deranged by his desire for Bathsheba kills him. Eight months after the horrible incident, Gabriel states that he will be going to America. Realizing how much she has always depended upon his strength and devotion, Bathsheba finally accepts his proposal of marriage. 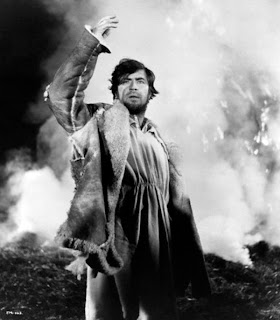 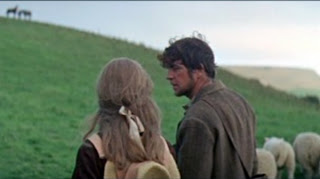 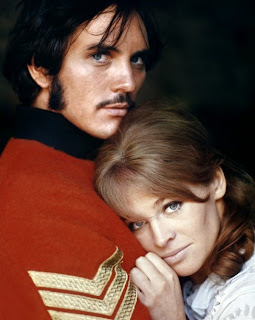 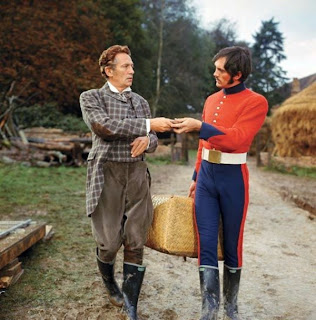 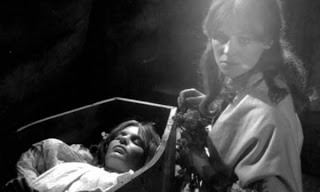 Normally I find a three hour film fairly daunting, however Far from the Maddening Crowd had what I like to call the handsome trifecta- Stamp, Bates, and Finch. You can’t turn that down no matter how much you dislike Julie Christie’s 60’s hair. My instincts were correct as this was a great and enthralling film with stand out performances by both Finch and Stamp. If you are not familiar with Terence Stamp's work, you should become so, he's still gracing us with his talent today. I would highly recommend an earlier film of his, The Collector.

Tonight on TCM!
Horror!
Posted by Sarah at 8:29 AM