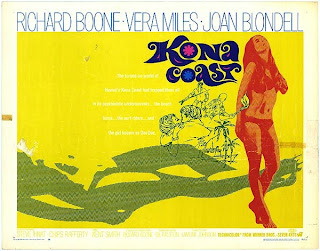 Tough man Captain Sam Moran (Richard Boone), who charters boats in Honolulu for a living, receives an odd phone call from his estranged teenaged daughter, Dee (Gloria Nakea), whom he reported missing four days prior. When she found dead on the beach, Sam doesn’t believe it’s an accident. Well known in Honolulu by both the police captain and townspeople, Sam begins making inquiries to track down the murderer. 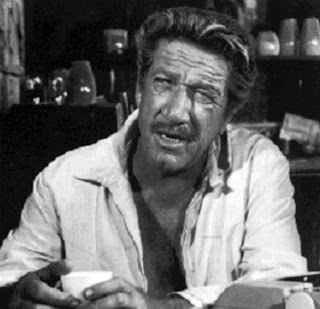 Kryder (Steve Ihnat) is a rich playboy who takes pleasure in getting girls hooked on narcotics and discarding them when they grow tiresome, Dee is his latest victim. He sends his henchmen after Sam when he learns of his investigation. After they beat him they burn his boat causing Sam's good friend Charlie Lightfoot (Chips Rafferty) to be severely burned trying to save it.

Sam takes the dying Lightfoot back to his Kona home where he meets Kittibelle (Joan Blondell), Lightfoot’s sister who tries to enlist Sam into taking over her brother’s boat because she needs the extra funds to support her run-down resort she uses to rehabilitate alcoholics. Despite hers and Akamai’s (Kent Smith) best efforts, Sam’s only mission is to get back on the case after Lightfoot’s funeral but Kryder has different plans. 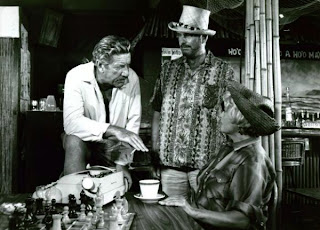 While Sam is busy reuniting with former girlfriend marine biologist Melissa Hyde (Vera Miles), Kryder orders a big luau prepared at Kittibelle's resort with the plan to kill Sam at the party for the fun of it.

However, when Sam’s friend Kimo (Sam Kapu Jr.) realizes that Kryder’s henchmen are on Sam’s trail, he and Lightfoot’s boat crew capture them and force them to confess about Dee's murder. Sam then pursues Kryder at the luau. 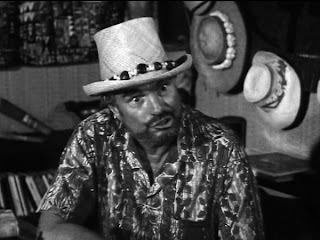 It’s one thing to see unprepared drivel such as Kona Coast with its underdeveloped plot line, character backgrounds, and horribly delivered melodrama. It’s quite another when good actors like Joan Blondell and Kent Smith are put into the mix.  I really hope that boredom or perhaps a free trip to Hawaii is what compelled them to partake in what I will not-so-affectionately call a long, bad Magnum P.I. episode. Sorry Tom Selleck, no reflection on the show, it’s all about location here.
Tonight on TCM!
Anne Francis!
Posted by Sarah at 9:17 AM