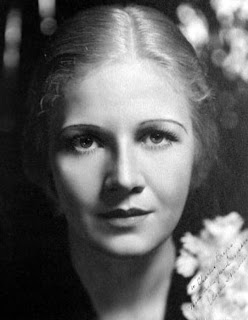 
There is a clause in actors’ contracts that always makes me want to hang my head, chew on a finger, dig my bare to in the soft loam and say, “Aw, shucks!” A clause which claims that the actor is “unique and extraordinary.” That is not inserted purely as a compliment, however. The actor is requested to endorse the claim, and is then requires by law and various acts of producer-gods to live up to it.
Now, how can he—after the fan magazines have run him through their mill and turned out just another “new” movie star, complete, C.O.D. for ten to twenty cents, with a full set of hobbies, favorite colors, breakfast foods and purple underwear? A few months later, the usual routine calls for a lead: “Is he slipping?” and after another period, he is neatly buried in a two-page spread: “Can he come back?”

The answer is: “Why should he?”—if you are one of the thousands who have followed his idiotic path through the fan magazine pages, believing, as you read, that “where there is some there is fire.”
How short-sighted of the mags to go so far afield from their grand old Pappy, the honored Fourth Estate. The garbled and twisted versions of what actors actually said in interviews—let alone the out-and-out inventions placed within quotes—have driven all of us into our armor plate at the sight of one of their approaching representatives. At that, the misquotation itself is often less painful than the libelous grammar in which it is couched.

What started this de-bunking mania, anyway? All right—H. L. Mencken—you win. But why bring it into a field of illusion to the millions who find life itself sufficiently debunked to begin with, and seek adventure and romance and beauty vicariously, through the lives of others? We—who according to contract are unique and extraordinary—have at least the touchstone of direct living. And that gift is not lost to us—though fan magazines pour the hottest lead and their most poisonous gas upon us in telling the wistful the “real truth.” Which isn’t the real truth—what is?—and if it were, the greater cruelty is not against us—it is the veil of deeper discouragement in the wistful eyes that read it.

The fan identifies himself with the hero in an hour of high adventure and emotional release. He doesn’t enjoy coming out into a sweltering or freezing or otherwise uncomfortable world, to find on the nearest magazine stand, that the person whose talent and personality have the blessed power to lead him into a land of dreams, is a driveling fool, a fake, or a monster. He feels somehow that he himself has been insulted too. Our fan mail is full of such indignant reactions to the phoney filth, the bald “insinuations” and sewer rakings. The don’t want it, they don’t like it when they get it, and it seems worth a wonder whether indeed this destructive approach is not, to a considerable extent, responsible for the drop in circulation among the more blatant of the scandal mongers.

It is a little fantastic that the boys and girls become enraged at those of us who decline to contribute toward our destruction by giving interviews and making possible those direct misquotes that too frequently follow our conversations with such pencil- pushers. They then set out to “get” us—using the power of print to avenge what they consider a personal grievance. Sporting, I call it. Naturally we withhold donations from the pages trying so cheaply but so doggedly to wring out personal and professional necks.

Fan magazines and actors draw their incomes from the same source. Both would profit by cooperating on a constructive policy for the benefit of the industry as a whole, instead of chasing each other around in this vicious circle. Mutual antagonism is burning brightly—the mags bristling with pins to stick into us—the actors locking themselves behind gates of reticence for sheer self-preservation. How silly, when we could really be of help to each other.

We turn to the Fourth Estate as our only true channel of communication with the world beyond Hollywood—and there IS a world beyond Hollywood, my little kiddies—a world that the fan magazines would have something to sell to, if they could win back our confidence by remembering the days when they were honest-to-God reporters—with a nose for news instead of a taste for unsavory hash. Some of them don’t even blush when an actor says, “But that isn’t news—can’t we think of something that hasn’t been covered so many times?”

Their way of earning a living is to shovel out so many words a month about us. If we don’t give them material, they must invent it to survive. And we can’t give it to them—as things are now and have been for some years—because of that embarrassing clause in our contracts. It has become a violation of our legal obligation to go into their ears as individuals and come out of their presses as rubber stamps of what they think all movie stars ought to sound like.

Obviously they agree that we are “unique and extraordinary”—and delight in printing in just what way they think so. Same to them! All right—let’s cry quits and play something else. Aren’t we all tired of this game? Let’s pretend that each side is “unique and extraordinary” in a decent way, for a change.
The mags can always stop first—we are the only ones who have to keep it up.


Debuting on the Broadway stage in 1921, Ann Harding was eventually brought to Hollywood like many stage actors and actresses due to her lovely speaking voice. Extremely beautiful with waiste-length blonde hair, Harding was promoted as RKO's answer to MGM's Norma Shearer. debuting onscreen in 1931 with Fredric March in Paris Bound, Harding found herself playing mostly in films for the "women's pictures" genre. Realizing she was being type-casted as the innocent, self-sacrificing character in film after film, she returned to the stage for the next five years. Eventually, she got in front of the cameras again and even tried her hand at several television shows.

I really enjoyed Harding's entry in the The Screen Guild. It's quite fascinating that as early as the thirties there were people who spoke out about the fantastic stories and libelous claims such fan magazines produced and unfortunately, are still producing. If only more people had taken action, we might be living in an era where nude photos and sex tapes aren't a means to revitalize or jump start one's career. It was especially brave of Harding to speak out as she was an actress under contract with the type of factory that encouraged such magazines to be produced.

Email ThisBlogThis!Share to TwitterShare to FacebookShare to Pinterest
Labels: Harding, Tuesdays with The Screen Guild Magazine