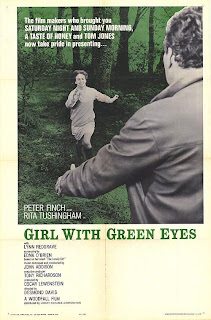 Longtime friends Kate (Rita Tushingham) and Baba (Lynn Redgrave) move to Dublin together to escape their small town blues. Extreme opposites, Baba is an extrovert whose chatty vivaciousness allows the more reserved Kate to experience a little social life. Their youthful experiments at drinking and dating are countered by their religion that encourages them to attend mass every Sunday despite living away from their family.

One day, the girls take a ride into the country with a male friend who is intent on selling a dog to Eugene Gaillard (Peter Finch), a writer. Kate meets him first and is instantly taken with him. By chance, the girls bump into him later that week and Baba invites him out to tea. As Baba chatters on, Kate feeds her curiosity by staring at Gaillard intently. Unable to get him off her mind, she first waits around the bookstore and teashop hoping to bump into him again. When that doesn’t work, she boldly writes to invite him out to tea. The director uses an interesting little technique of showing the note on screen side by side with Kate at her desk writing it. Though out of sequence with the rest of the film’s darker theme- it adds a quirky touch.


Gaillard accepts her invitation and as Kate asks several questions there’s another interesting technique of them speaking in the same conversation but in different times and places- a relationship developing. However, Gaillard doesn’t want to get involved- the red light for most girls to give the typical answer which Kate does- neither does she, she just wants to be friends. Will we ever learn? 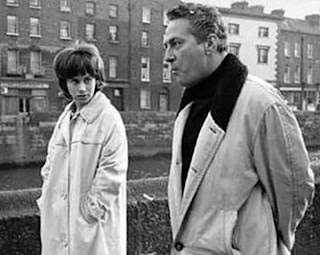 Kate starts spending nights at Eugene’s house and after a few visits, ventures out of the guestroom and into his bed where she is unable to consummate the relationship due to the strangeness most likely brought on by her religious background. She does this despite knowing Gaillard is married but slightly estranged from his wife. When her family back on the farm learns of her relationship, they drag her back home where a priest tries to talk some “sense” to her. Running away again, she hides at Gaillard’s house and wonders how he can remain so calm. When her father and a few of his friends arrive, Gaillard realizes things are no longer a joke. Thankfully his housekeeper knew how to wield a gun. After Kate’s father departs, Kate and Gaillard finally consummate their relationship. He gives her a wedding ring, takes her shopping, and moves her into his house. But it’s all ceremony, something to appease Kate.

However, real life begins to invade. Realizing that she is not mature enough to understand that he must work, he must maintain a relationship with his estranged wife because of their daughter, and he, at times, must put up with friends that will talk about his wife in front of her, Gaillard finds he does not know how to control the situation. Surprise, surprise. Another large factor is that he’s not at all religious. When he asks Kate why she bothers with Mass, she answers simply that she likes to go, it helps her when she feels all the goodness has gone out of her. Wonderful line. 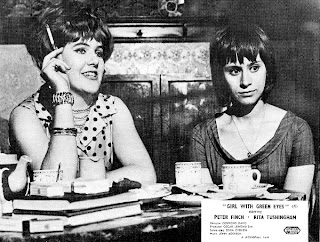 One day Kate opens a letter from Gaillard’s wife that contains a plane ticket to New York and a note chastising him for messing with such a young woman. An argument ensues where it’s plain that Gaillard knows he’s gotten himself into something he meant to avoid in the first place. Afterwards, Kate asks if she may go into town with him. She runs off while he isn’t looking, hoping and expecting him to come after her. She is too naïve to realize she too has given him a ticket—to the way out. Though devastated, the film ends with Kate heading off to London and new adventures. There is a very touching scene on the boat as it leaves the port and Kate realizes that Gaillard didn’t come to see her off. She stars at the disappearing land and then smiles and turns to Baba and asks if she looks like a woman with a past? Baba responds with something jokingly and Kate runs to join in the fun on the boat. Ah youth!


The film ends with Kate, now firmly transplanted in London with Baba. Gaillard has written to her about their time together and she realizes that he did help her to get over a hump of sorts. She’s a wiser woman her May-December romance has given her the courage to be more outgoing, more confident. 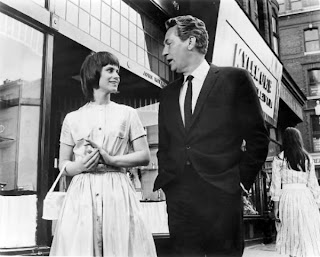 Girl with Green Eyes is another wonderful example of the immergence of realistic filmmaking in the British counterculture of the sixties. With unusual shots and at times dizzying views, the audience is treated to the drab surroundings of post war Europe that either depends upon the characters to brighten the place up or uses the background to enhance the feelings and actions of the character. I honestly could watch Redgrave and Tushingham in a whole slew of these types of films. I think it wouldn’t hurt to check out more Peter finch movies either. He was fantastic in The Network.


Tonight on TCM! I watched this the other night- simply a MUST SEE!
Splendor In The Grass (1961) Sexual repression drives a small-town Kansas girl mad during the roaring twenties. Dir: Elia Kazan Cast: Natalie Wood, Warren Beatty, Pat Hingle.
Posted by Sarah at 5:57 AM