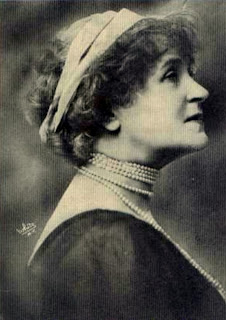 NOW AM I HOLLYWOOD...

[Reprinted from The Screen Player, 1934]

Sooner or later, we all come to Hollywood. I am referring to stage players whose names still do, and did, make up casts of plays that are produced in our New York theatres. Some I know, and some I don't know.

But on studio sets, in the streets and in restaurants, I continually run into old stage friends with whom I played in the heyday of Broadway. Evidently, they have all followed Horace Greeley's advice and "gone West."

Men and women whose names, in former days, emblazoned the facades of our theatres in electric lights, now haunt the studio lots where a few years ago they were taboo. A few are stars, some are near stars, and others contribute sterling performances in just bit parts.

And with our knowledge of the "spoken word," it is quite natural that we should drift to Hollywood, where talking pictures are produced.

When we arrive, we know little of the technique of pictures, but we do know our theatre, and that is the art of acting. So, the camera soon becomes to us just another medium for the expression of human emotion.

What has been our contribution to pictures?

Well, in the first place, we have brought Hollywood some of the tradition of the theatre, and that was sadly needed. Pictures are much too new to boast traditions, and traditions are essential in the production of any art. But time will remedy that.

At first, it is all very new and strange to us. We of the theatre have always been accustomed to a very close relationship with our management, and I think we miss that in Hollywood more than anything else.

Lack of proper liaison between departments in the large studios is responsible for the feeling that the management has little sympathy with the actor's hopes and ambitions, so that we sometimes feel like sheep lost from the fold and left to stray as best we may.

We actors are an emotional, sentimental lot--children, if you will--and we need sympathetic response from those who guide our artistic destiny if the best in us is to be brought out.

Then, too, I miss the dignity of the theatre.

Time and again, since I have been out here, I have been told not to take pictures seriously, but I am not the kind to take my work lightly. To me, acting is an art, and as an artiste I cannot slight my art. I don't believe any real artiste can.

Just a few months ago, I passed my fiftieth year on the stage. I had forgotten, but the fact was brought to my mind by the receipt of a letter from a man who wrote that he was proud to have in his possession a theatre program of Bartley Campbell's White Slave, dated 1883--just fifty years ago--in which my name appeared in the cast.

And that was my first part.

Recently, I had to sign my name at the post office here for the delivery of a package addressed to me. The clerk took the paper from my hand and finally deciphered the name.

"Henrietta Crosman," he mumbled, as if trying to recall something vague.

Then, looking at me, he asked:

"Wasn't you an actress once?"


Henrietta Crosman had a long and successful career onstage before she was tapped for a one picture deal with Famous Players in 1914. Though she appeared onscreen only a few times in the silent era, her movie career took firmer hold in the thirties with her first talkie The Royal Family of Broadway. Usually playing grande dame roles, she appeared in seventeen films from 1930 to 1937.
Posted by Sarah at 10:51 AM

Email ThisBlogThis!Share to TwitterShare to FacebookShare to Pinterest
Labels: Crosman, Tuesdays with The Screen Guild Magazine