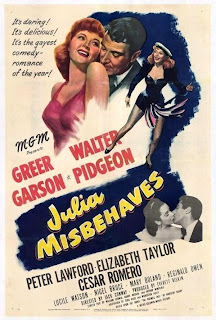 Julie Packett (Greer Garson) is an English dancehall actress who’s often broke but manages to get by with pluck, a positive attitude and charitable friends. When she learns of her estranged daughter’s pending marriage, one such friend graciously offers to deck her out and send her off to the wedding. When William Packett, (Walter Pidgeon) Julie’s ex-husband and his mother (Lucile Watson) learn of her invitation to Susan’s (Elizabeth Taylor) wedding, William hurries off to catch her halfway and convince her not to come. However, he doesn’t get his chance and Julie arrives before he gets back home and is warmly accepted by her daughter who secretly sent the invitation.
Julie sets about to make sure that Susan makes the right decision with her marriage while fending off her ex-husband’s new ignited passion for her. He left her once, who’s to say he won’t do it again.

Full of funny banter and some awkward moments, Julia Misbehaves is a fun little film. I am beginning to realize that Garson and Pidgeon were paired so often together for a reason- they had serious onscreen chemistry!


Tonight on TCM!
The Lady Eve (1941) A lady cardsharp tries to con an eccentric scientist only to fall for him.
Cast: Barbara Stanwyck, Henry Fonda, Charles Coburn, Eugene Pallette Dir: Preston Sturges
Posted by Sarah at 6:09 AM