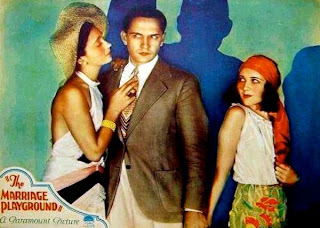 The seventh picture that Fredric March did under his five year contract with Paramount and his best received as of 1929, The Marriage Playground was based on Edith Wharton's novel, The Children.

Divorced and remarried American couple Joyce and Cliff Wheater (Lilyan Tashman and Huntley Gordon) who are more concerned with jetsetting than raising a family, leave their seven children to fend for themselves in Europe under the care of their eldest daughter Judy (Mary Brian). When Martin Boyne (Fredric March) an old family friend runs into Judy and her brood, he puts aside his visit to his fiancee, Rose (Seena Owens) and dedicates himself to helping Judy keep her parents from getting another divorce and seperating the children. Though Judy is considered a child herself by Martin, they eventually fall in love and decide to keep the children themselves. 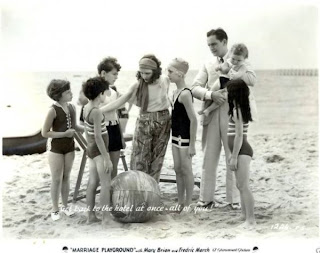 Though my copy is not the best, March's eloquent speaking voice stands out most of all. "Judy!" I found The Marriage Playground a warm if predictable story that reflects the social mores and attitudes of the time. Though most of the acting is stilted, as to be expected in the early talkies, March seems relaxed and comfortable in his role. In comparison, he outshines Mary Brian's over-reacting (most likely a remanent from her silent film career).

The Marriage Playground garnered March's best reviews up to that point in his career, by the end of 1929 he was a much sought after leading man.
Posted by Sarah at 5:11 AM