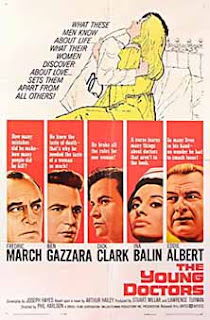 The Young Doctors is a film about transition and change, the question of life as seen through death. Dr. Pearson (Fredric March), a pathologist, lives by the motto seen in most autopsy rooms- Mortui Vivos Docent (the dead teach the living). Unfortunately, Dr. Pearson is a bit dated in his policies and instead of getting more administrative assistance as he has been requesting for years in his over worked lab, he is sent another pathologist, Dr. Coleman (Ben Gazzara). Dr, Coleman is not only younger and more knowledgeable in modern techniques, he is also a force to be reckoned with. Through resentment, personal tragedies, and human error, Dr. Pearson and Dr. Coleman learn a painful but valuable lesson from one another- being young and idealistic is par for the course, unfortunately it has a habit of getting in the way of getting the job done. Dr. Pearson is reminded of an earlier version of himself in Dr. Coleman and gives him the best advice any elder can- never let anything get in the way of being idealistic, of advancing yourself through knowledge and research. Like most, Dr. Pearson had to learn that the hard way.

Another wonderful performance by Fredric March but as anyone who knows me knows- even if March serves ham I gleefully eat it up! I say this because in all the films I have seen March in, both serious and comedic, there are moments, in my opinion, where he has come across a bit hammy. I don't know if this is because he started out as a stage performer and remained so throughout his career, if this was his way of humanizing a character, or if it's as I have read before, that when he didn't like certain points in a film or the film altogether, he intentionally hammed it up. Either way, he always makes up for it with his overall performance.
I noticed in The Young Doctors that he displayed less of his usual mannerisms in this film, mainly the puckering of his lips as he made a decision, and a complete absence of the darting tongue usually seen when his character is angry. This made me concentrate more on his delivery of dialogue, meant to be direct, authorative, but also empathetic. He almost sounded like a different person altogether.
The film also includes the talented Ben Gazzara whom I have kept my eye on since seeing Anatomy of a Murder and Husbands. A very talented actor in his own right, Gazzara does not disappoint. I was also pleasantly surprised to find Aline MacMahon in this film, she's become a real favorite of mine as I watch my thirties films. Though it's always sad to see the stars of yesteryear age , I was happy to find her playing a respectable role outside of a horror film, so very commonplace for the sixties.
Posted by Sarah at 11:11 AM