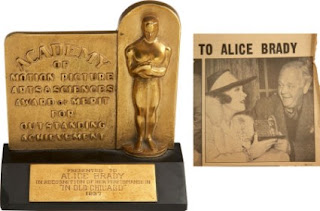 I came across the Heritage Auction Galleries for 2008 and learned an interesting little tidbit about Oscars for Supporting Actors and Actresses and Alice Brady. In the early days of the Academy Awards Best Supporting Actors and Actresses did not receive a full Oscar statuette, they would receive an award like the one above. Eventually these awards were considered second rate, despite the fact that they were Awards of Merit, and the Academy stopped handing them out after WWII. All the Supporting Actor/Actress awards from the past were traded up to a full statuette.
In 1937 Alice Brady won the Academy Award for Best Supporting Actress for her performance as Mrs. O’Leary in In Old Chicago (1937). However, due to a broken ankle she was unable to attend the ceremony and in her absence a stranger walked onto the stage, accepted the award, and disappeared with it. The Academy issued a replacement but Alice Brady never got to trade her Oscar up as she died tragically of cancer in 1939 at the age of 46.
The photo above is of Charles Winninger and Alice Brady holding the replacement award, possibly shot on the set of their 1938 comedy Goodbye Broadway. Note that the plaque includes an engraving error giving In Old Chicago the date of 1837.
Tonight on TCM!
The Killers (1946)
An insurance investigator uncovers a string of crimes when he tries to find a murdered boxer's beneficiary. Cast: Burt Lancaster, Ava Gardner, Edmond O'Brien, Albert Dekker Dir: Robert Siodmak
The Man Who Shot Liberty Valance (1962) An experienced gunman and a peace-loving tenderfoot clash with a Western bully. Cast: James Stewart, John Wayne, Vera Miles, Lee Marvin Dir: John Ford
Posted by Sarah at 5:00 AM