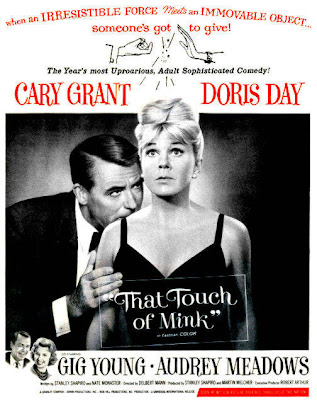 Cathy Timberlake's (Doris Day) coat and dress are ruined when she is splashed with mud by a passing limousine belonging to tycoon Philip Shayne (Cary Grant). To make matters worse she is on her way to collect her unemployment check and must endure the ironic mix of insults and advances from clerk Everett Beasley (John Astin) and she has an interview for another job that afternoon. Though Philip circled the block to look for the woman he splashed it isn’t until he spots Cathy entering a diner that’s directly across from his office that he realizes he can pay for any damages accrued. Instead of going himself, he sends his neurotic friend and financial adviser, Roger (Gig Young) to apologize for him. However, Cathy thinks it’s rude that Phillip cannot offer an apology himself and is encouraged by Roger to confront Philip and throw his money back in his face. Roger, a former Princeton professor who was lured away from his students when Phillip offered him financial security, would quit his job if he didn’t owe his analyst so much money. So, Roger is keen on seeing someone deny Phillip’s money. However, when Cathy is introduced to Philip, she’s attracted to him immediately, blames the accident on her own carelessness and agrees to travel with him on a business trip to Baltimore. Roger is severely disappointed and also mistaken for Philip by Cathy’s friend Connie (Audrey Meadows) who works at the diner and doesn’t mind physically taking her frustration out on him.
Phillip and Cathy have such a wonderful day together travelling around to different cities on his private jet that Philip offers to take Cathy to Bermuda, then around the world. Cathy mistakes this for a marriage proposal but Philip sets her straight and leaves the decision to her. He tells her he will call her the next day once she has decided. While Cathy makes up her mind to say no with the help of her cynical friend Connie, Philip is attacked by his own conscience and decides he should withdraw his offer. However, while he is brooding over this, Cathy grows impatient and calls him. He tells her of his decision, citing that he knows her answer would be no when Cathy surprises them both of them by saying yes.
After receiving a new wardrobe from Philip, including a mink coat, Cathy is flown out to Bermuda to meet him. While they spend the day together they are constantly reminded of their “situation” from newlyweds, to a priest, to the knowing look from a girl who is more willingly in the same boat as Cathy. This makes her more and more nervous until she finally breaks out in a rash leaving Philip the option of warm milk and butter to help him fall asleep on the couch. The next day they return from Bermuda and Cathy returns all the clothing Philip bought her. Roger is bolstered by this new development and thoroughly confuses his analyst who is more interested in Roger’s stock tips than his personal problems. His analyst believes it's Roger who is being courted by Philip.
Needless to say, Cathy leads Philip on a merry ride trying to the woman he wants and not succeeding. Will turning to deception win the heart of a millionaire who has no interest in marriage? 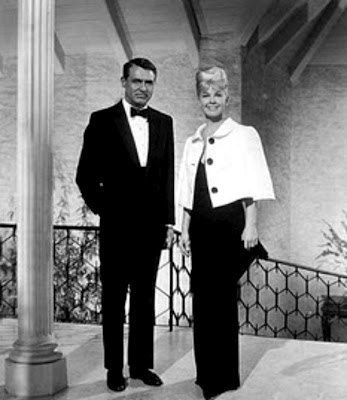 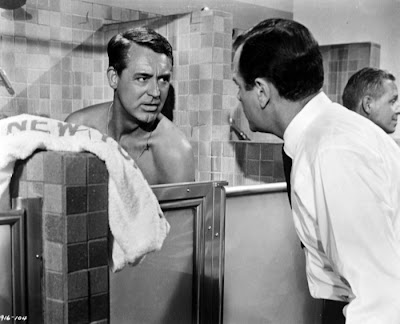 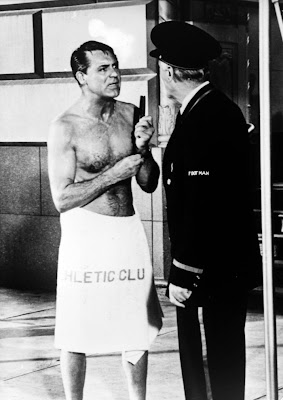 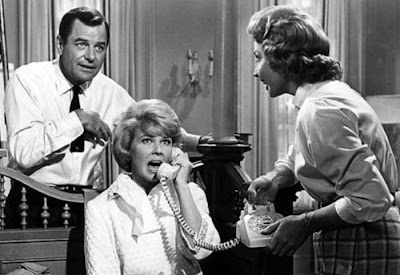 Subtly like Every Girl Should Be Married (1948), That Touch of Mink, in my opinion, is handled better due to the cast of characters and the comedy in the situations displayed. Instead of seeming too drawn out and embarrassing to watch, like some parts in Every Girl Should Be Married, the problem and solution are hilariously played out and enjoyable to watch. This isn’t my first time seeing this movie but it's so entertaining one is easily drawn in so I had to watch it when I caught it on TCM last night.

Side note:
Cary Grant was a big fan of "The Honeymooners" (1955) and Audrey Meadows in particular, and was responsible for getting her the part of Connie.
Tonight on TCM!
The Major and the Minor (1942) A woman disguises herself as a little girl and ends up in a military academy. Cast: Ginger Rogers, Ray Milland, Rita Johnson, Robert Benchley Dir: Billy Wilder
Posted by Sarah at 4:36 AM