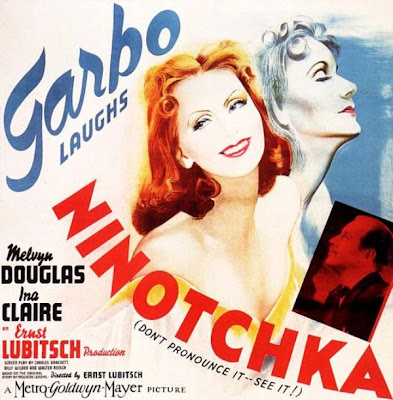 Only the royal suite at the grandest hotel in Paris has a safe large enough for the jewels of the Grand Duchess Swana. So the three Russians who have come to sell the jewels settle into the suite until a higher ranking official is dispatched to find out what is delaying the sale. She is Ninotchka, a no nonsense woman who fascinates Count Leon who had been the faithful retainer of the Grand Duchess. The Grand Duchess will give up all claim to the jewels if Ninotchka will fly away from the count. But can one count on a count? -TCM 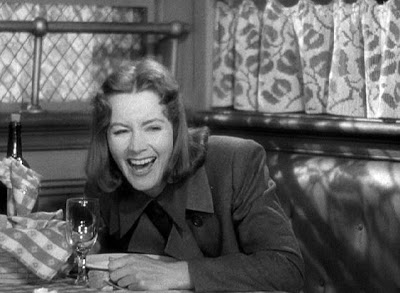 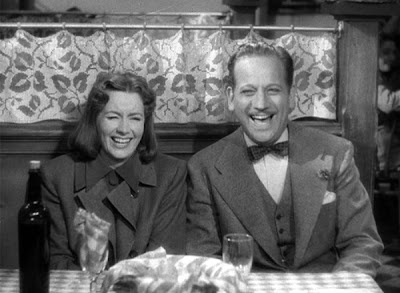 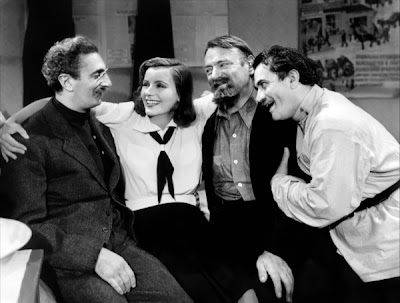 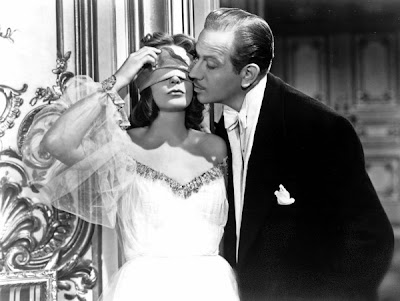 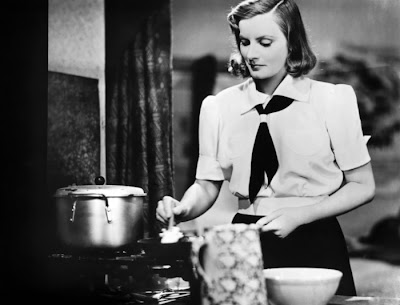 Ninotchka was a good film though I preferred Garbo as the stern-faced Communist to the simpering love goddess she displays in most of her films. I have noticed a trend when it comes to Garbo's acting, similar traits that I associate with Katharine Hepburn when it comes to annoying gestures. Garbo throws her head back a lot as she mews a complaint, and wrinkles her nose as she shakes her head in disagreement over something silly, and rolls her eyes when in ecstasy or extreme pain. Gestures that made her the famouse actress she was however redundant, but it makes me wonder if anyone else viewing her movies at the time thought the same thing I did, can't she give us something fresh?
Despite having misgivings about performing in a comedy, Garbo, who was a bigger draw in Europe than the US and needed to be revamped due to the war and dwindling sales. So, with the help of Lubitsch, Ninotchka was a film built around one single, legendary slogan- "Garbo laughs!" A tagline that came about before the screenplay had even been written.
Though Garbo laughs, it's the dialogue that will draw you in. Lubitsch, famous for his sly wit and subtle sexual humor does not fail with Ninotchka. Check out some of the quotes below. It helped much that Melvyn Douglas was delivering most of it.

Prologue: This picture takes place in Paris in those wonderful days when a siren was a brunette and not an alarm - and if a Frenchman turned out the light it was not on account of an air raid!

Swana: It's really a wretched morning, wretched. I can't get myself right. I wanted to look mellow and I look brittle. My face doesn't compose well - it's all highlights. How can I dim myself down, Leon? Suggest something. Oh, I'm so bored with this face. I wish I had someone else's face. Who's face would you have if you had your choice? Oh well, I guess one gets the face one deserves.
Leon: There's one marvelous advantage to your conversation, Swana. However many questions you ask, you never expect an answer.

Ninotchka: We don't have men like you in my country.
Leon: Thank you.
Ninotchka: That is why I believe in the future of my country.

Leon: Do you like me just a little bit?
Ninotchka: Your general appearance is not distasteful.

Ninotchka: The last mass trials were a great success. There are going to be fewer but better Russians.

Leon: A Russian! I love Russians! Comrade, I've been fascinated by your five-year plan for the last fifteen years.

Ninotchka: What have you done for mankind?
Leon: Not so much for mankind... for womankind, my record isn't quite so bleak.

Ninotchka: Let's form our own party.
Leon: Right. Lovers of the world, unite!

Anna: Oh, that Burganoff. You never know if he's on his way to the washroom or the secret police.

Ninotchka: I should hate to see our country endangered by my underwear.

Comissar Razinin: This anonymous report was sent to me. They're dragging the good name of our country through every cafe and nightclub. Here: How can the Bolshevik cause gain respect among the Muslims if your three representatives Bujlianoff, Iranoff and Kopalski get so drunk that they throw a carpet out of their hotel window and complain to the management that it didn't fly?

Iranoff: We can say whatever we want. We can shout! We can complain! Look: THE SERVICE IN THIS HOTEL IS TERRIBLE! See? Nobody comes, nobody pays any attention! That's freedom.
Buljanoff: That's bad management.

Ninotchka: Must you flirt?
Leon: Well, I don't have to, but I find it natural.
Ninotchka: Suppress it.

Leon: A radio's a little box that you buy on the installment plan, and before you tune it in, they tell you there's a new model out.

Leon: Pardon me, are you an explorer?
Ninotchka: No. I'm looking for the Eiffel Tower.
Leon: Good heavens, is that thing lost again? Oh, are you interested in a view?
Ninotchka: I'm interested in the Eiffel Tower from a technical standpoint.
Leon: Technical? No, no, I'm afraid I couldn't be of much help from that angle. You see, a Parisian only goes to the tower in moments of despair to jump off.
Ninotchka: How long does it take a man to land?
Leon: Now isn't that too bad? The last time I jumped, I forgot to time it.

Leon: What kind of a girl are you, anyway?
Ninotchka: Just what you see. A tiny cog in the great wheel of evolution.
Leon: You're the most adorable cog I've ever seen.

Russian Visa Official: To an unseen caller: "Hello! Comrade Kasabian? No, I am sorry. He hasn't been with us for six months. He was called back to Russia and was investigated. You can get further details from his widow."

And the best quote of all! Though Adrian was costumier to many great MGM screen legends, Garbo was the clotheshorse, the inspiration. In fact, when she left MGM, so did he. "It was because of Garbo that I left MGM. In her last picture they wanted to make her a sweater girl, a real American type. I said, 'When the glamour ends for Garbo, it also ends for me. She has created a type. If you destroy that illusion, you destroy her.' When Garbo walked out of the studio, glamour went with her, and so did I."
So when I heard this line, I thought it was hilarious!
Ninotchka [Looking at a hat in a shop]: How can such a civilization survive which permits their women to put things like that on their heads? 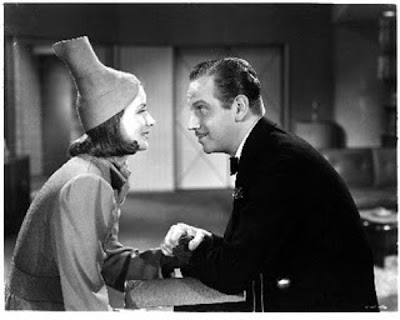 Although Greta Garbo's famous hat in the film was made by her regular costumier Adrian, it awas actually based on a sketch by Garbo herself.