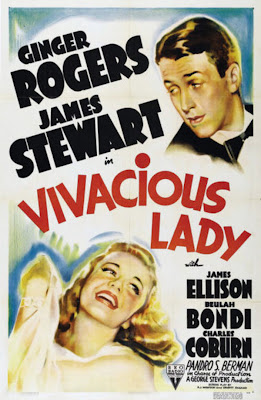 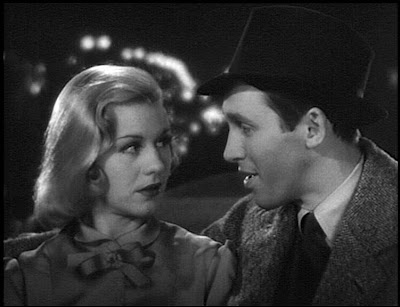 Vivacious Lady is a comedic love story involving a young botany professor named Peter Morgan Jr. (Stewart) and a nightclub singer named Francey (Rogers). After falling in love at first sight the two are quickly married and return to Peter’s home town of Old Sharon where his father Peter Morgan Sr. (Charles Coburn) anxiously awaits his arrival.
The film consists of Peter Jr. making a series of attempts to tell his family that he married a girl they probably won’t approve of. Throw in a jealous intended (chosen by Peter Sr.), a mother faking heart problems to deter rows between father and son, and a drunken cousin who got Peter into this mess in the first place, and you have a tidy little comedy.

Though I would classify Vivacious Lady under a “quickie” film, some of the scenes between Stewart and Rogers are priceless, and Rogers just gets better in every movie I see her in. The best scene in the film though is below. Thanks to Tom over at Motion Picture Gems for pointing me in the direction of the video!!