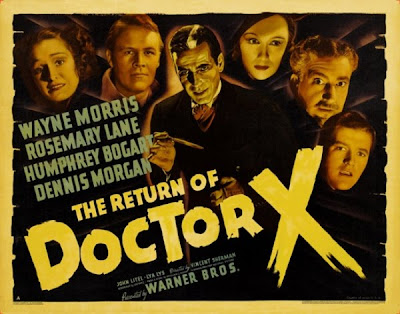 When reporter Walter Garrett (Wayne Morris) finds the dead body of actress Angela Merrova (Lya Lys) in her hotel room, he immediately alerts the newspaper he works for. However, by the authorities arrive, the body is missing, and Merrova is threatening to sue the paper. Confused and unemployed, Walt determines he really did see a dead body and proceeds to investigate. First he visits his friend Dr. Rhodes (Dennis Morgan), for some advice, and Rhodes refers the case to his associate, Dr. Francis Flegg (John Litel), a doctor renowned for his work in hematology. Flegg suggests that Walt stop drinking so much but Rhodes's interest is piqued when he is called in to identify the body of Rodgers, one of his patients, and Walt insists that this murder is identical to what he found at Merrova's apartment. A dead body drained of all its blood. That night, Rhodes visits Flegg to have him examine an odd blood sample he found at the scene of the crime. This is when he meets Flegg's sinister assistant Marshall Quesne (Humphrey Bogart). Walt secretly follows Rhodes to the doctor's house, and when he later sees Merrova enter the building, he convinces Rhodes to visit Merrova with him. The next day, they both call on the actress at her apartment, where she confirms Walt's story and promises to elaborate the following day. Their visit is interrupted by the arrival of Quesne who is there on behalf of Dr. Flegg. When Merrova mysteriously dies, before giving an explanation, Walt digs deeper, convinced he has seen Quesne somewhere before. While researching the newspaper files, Walt comes across a picture of Quesne that identifies him as Dr. Xavier, a killer executed for murdering a child via research. When Walt and Rhodes discover Xavier's empty grave, they confront Flegg, who confesses that he brought Xavier back to life as an experiment, hoping to create an artificial blood that would keep him alive. Until he does, Xavier takes matters into his own hands by killing for the rare blood he needs to remain alive. While Walt and Rhodes are confronted by police on Flegg’s front steps they hear a gun shot, Xavier has overheard Flegg’s confession and demands his blood donor book. When Flegg refused, he shot him. Xavier then kidnaps Joan Vance (Rosemary Lane), a nurse who has the rare blood type he needs, and takes her to his lab out in the woods with Walt, Rhodes and the police on his trail. They arrive just in time to shoot Xavier and save Joan from death. 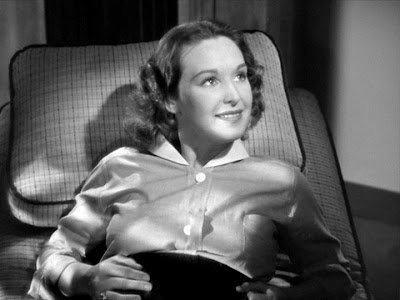 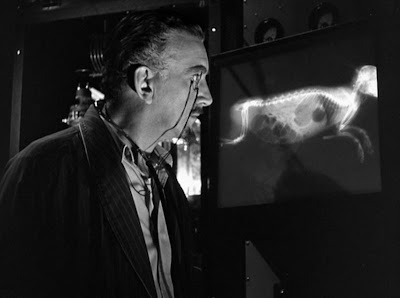 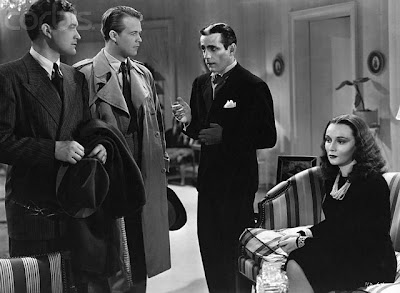 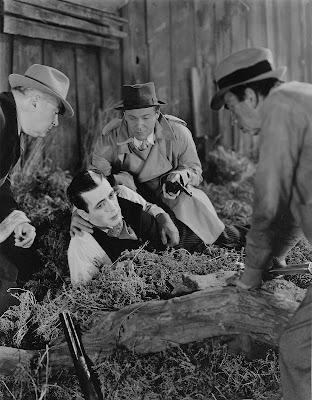 Ok, synopsis aside, the real entertainment of this film is the fact that it's a B level horror film that features one Humphrey Bogart. Whaaa??? Though billed third in the credits, Bogart is the most memorable feature of the film with his odd appearance as a neurotic, half-dead lab experiment gone awry sporting bad hair. Unfortunately the rest of the film though not entirely bad, fades into the background due subpar acting, a insubstantial plot, and what seems to be a reluctant Bogart. That said, I didn't really dislike the film, I was mostly just bored whenever Bogart was not onscreen. I wonder how audiences of the thirties felt when they saw it.
I originally thought Bogart did this film as a hoax but upon further research learned that he was not quite the big name he would become a couple of years later after the successes of High Sierra (1941), The Maltese Falcon (1941) and Casablanca (1942). I also read, but am not entirely sure if it's true, that Warner Brothers made him do the film as punishment for acting up in public with his then wife Mayo Methot, a woman who contributed to their popular moniker, "The Battling Bogarts".
Humphrey Bogart reviled the film and said: "This is one of the pictures that made me march in to Jack Warner and ask for more money again. You can't believe what this one was like. I had a part that somebody like Bela Lugosi or Boris Karloff should have played. I was this doctor, brought back to life, and the only thing that nourished this poor bastard was blood. If it had been Jack Warner's blood, or Harry's, or Pop's, maybe I wouldn't have minded as much. The trouble was, they were drinking mine and I was making this stinking movie."


Today on TCM!
Sherlock Holmes!
Posted by Sarah at 5:00 AM