Warning: Serious Spoilers in this entry! 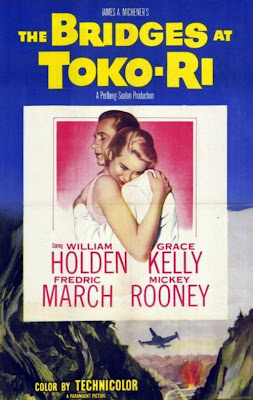 Every once in a while you’ll watch a movie that really resonates with you. When I recorded The Bridges at Toko-Ri it was explicitly because it’s my goal to see everything available that Fredric March has been in. Though I enjoyed March in the film, I got much more than I bargained for. The Bridges at Toko-Ri is still on my mind, the message and the action in the film was that powerful. It is a film with a message that is both patriotic and anti-war. It openly criticizes US involvement while praising those who fought in it. No easy task. It gives an honest example of the sacrifices armed forces made in a time when America was war-weary and most participants were reluctant to fight.

Lt. Harry Brubaker (William Holden) is a former military pilot who served in WWII and has been recalled to duty from the Navy Reserve. Despite believing he's already served his country and wanting to devote himself to his wife Nancy (Grace Kelly) and their children, Brubaker reluctantly accepts his commission. He is sent back into action as a pilot, with a special assignment to blow up strategically vital bridges in the Korean canyon of Toko-Ri.
Rear Admiral George Tarrant (Fredric March) is no stranger to sacrifice, he has lost two sons to war, his daughter-in-law went crazy after losing her husband, and his wife sits quietly in a room devoid of any love or feeling, knitting a baby’s sweater. In the face of all this, Tarrant still believes in duty and encourages Brubaker, who reminds him much of his lost son, to fight, not because he wants to but because circumstances demand it and that’s his job.
Nancy Brubaker is a wife who is kept in the dark. Her husband doesn’t like to discuss his missions in order to save her from worry. When she briefly visits her husband on his three day leave in Tokyo, she meets Tarrant who encourages her to ask her husband about what he does. Tarrant uses his own daughter-in-law as an example, she wasn’t strong enough to handle the news when she heard her husband died and tried to find comfort in the arms of other soldiers. When Nancy is told by her husband of his dangerous mission, she worries but feels stronger for the knowledge.
While Tarrant tells Nancy his tragedy, Brubaker is off to get Mike Forney (Mickey Rooney) out of a Tokyo jail. He got into a fight over a girl and he and Nestor Gamidge created eighty dollars worth of mess, a fine that Brubaker gladly pays as Nestor and Forney are a part of the helicopter rescue squad and have gotten Brubaker out of some serious scrapes.
After his three day leave Brubaker boards the ship reluctantly. When he flies another mission and witnesses first hand the difficulty of it he has a hard time coming to terms with what he must do. His anxiety is palpable as he tries to find some escape on the large ship. Though given the option to ground himself if he doesn’t think he’s mentally capable of the mission, Brubaker forges ahead. The mission goes well but his jet is shot and leaking fuel badly. Thus begins a drawn out scene filled with suspense as the viewer wonders if he will make it back to the ocean where he can crash safely out of the enemy’s gun lines. Commander Lee (Charles McGraw) is in a jet beside him and you can’t help but wonder if you were in that situation whether you wouldn’t be upset by the circumstances. The commander has made it through the mission safely all he needs to do is fly back to the ship while you must worry if you are going to have to land amongst the enemy.
Brubaker’s jet does not make it and knowing that the enemy loves to shoot at parachuters, he decides to crash in open field. Forney and Nestor are on their way as Brubaker runs to hide out in an irrigation ditch. The enemy crawls quickly towards him and he is saved by his commander and the other jets that fly over to shoot at them. It’s a very touching scene, this unity he has with his fellow officers but you quickly realize the futility of it. When Forney arrives the helicopter is damaged by artillery, Nestor is killed immediately. It’s getting on dark and no more help will arrive until the next day. The jets can no longer stay as they have run out of ammunition and will soon run out of fuel. The enemy has several reinforcements. Forney hands Brubaker a gun and tells him how to use it. Brubaker doubts he’ll be able to hit any target.
Lt. Harry Brubaker: I'm a lawyer from Denver, Colorado.
Mike Forney: Judas, how'd you wind up in a smelly ditch in Korea?
Lt. Harry Brubaker: I was just asking myself that same question.
It’s then that Brubaker realizes the true meaning being Tarrant’s words; one fights because that’s what one is supposed to do. As the enemy closes in, you can’t help but hope that some great miracle will happen. This is William Holden for corn sakes! You can’t kill William Holden! This is Holden at his finest as he scrambles around that irrigation ditch, his desperation and adrenaline might as well be yours because if you aren't standing at this point watching, you are at the very least on the edge of your seat. Brubaker fights until the very end.
When the three deaths are confirmed Tarrant questions Lee as to whether the mission really went well or not. His emotions are mixed up in that question, something that Lee points out and Tarrant concedes to. The film ends with Tarrant asking a most important question: “Where do we get such men?” 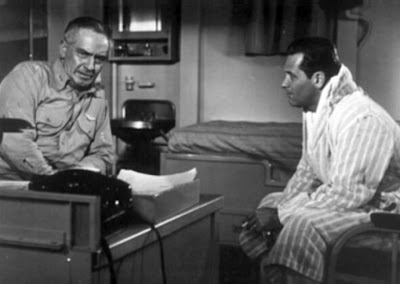 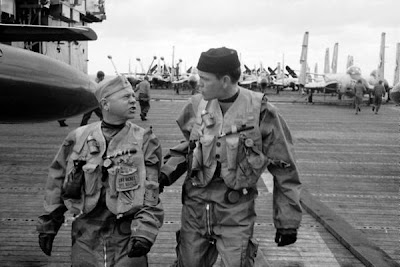 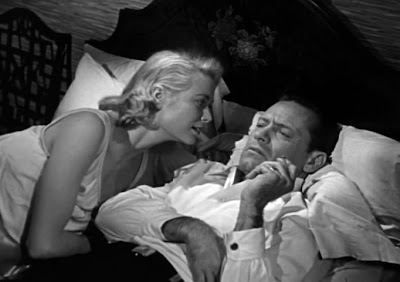 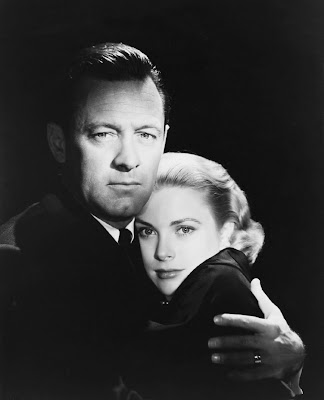 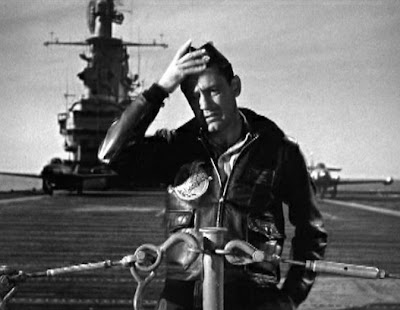 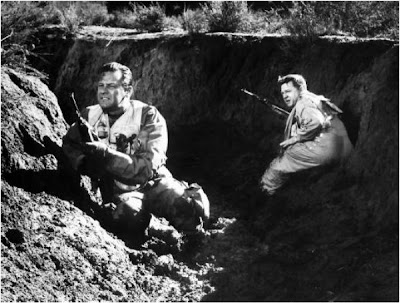 This was an absolutely outstanding film. The fighter jet sequences were exciting, the action was exciting. The realistic nature of the film, the way it captured a person’s sacrifice was very well done. I would highly recommend this movie simply because of Holden and March. Kelly and Rooney I could do without as I find one supremely overrated and the other an ass. 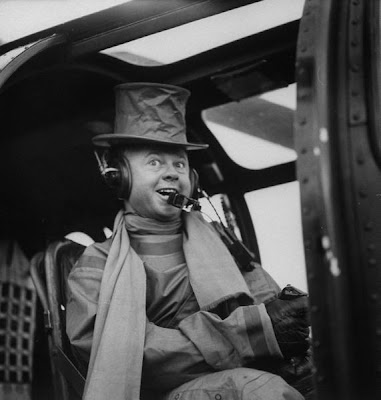