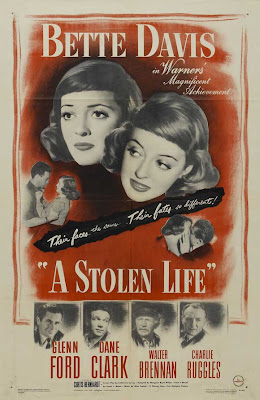 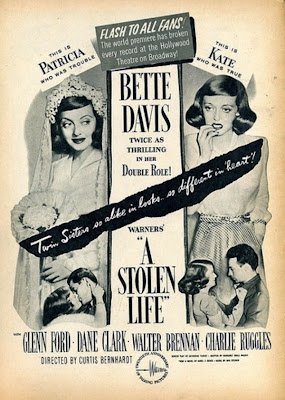 When painter Kate Bosworth (Bette Davis), who is on her way to visit her cousin Freddie, misses the steamer boat traveling to an island off the coast of Massachusetts, she hitches a ride on a launch driven by handsome Bill Emerson (Glenn Ford). The launch stops briefly on the island to pick up crotchety Eben Folger (Walter Brennan), the keeper of the lighthouse on nearby Dragon Head. Determined to see Bill again, Kate talks the reluctant Eben into posing for her by offering him a ship in a bottle that he covets. One day, a heavy fog prevents Kate from leaving, and she stays a while to talk to Bill. Soon the two have fallen in love. Although Bill is leaving the vicinity temporarily for a new job, he promises to return. Kate's twin sister Pat, who is also visiting the island, meets Bill on the dock and he mistakes her for Kate. Pat pretends to be her sister and has lunch with Bill, who is totally charmed by her vivacious nature. Pat's ruse is revealed when Kate arrives, but later, learning that Bill is going to Boston, Pat takes the same train and continues her acquaintance with him. By the time Bill returns to the island, he and Pat are in love and a short time later, they marry. After her return to New York, Kate meets unsuccessful artist Karnock (Dane Clark), who attacks her work for being stiff and repressed. One day Bill comes to town to tell Kate that he is taking a new job in Chile. Later, Karnock, who has been working with Kate, makes a pass at her. Kate realizes that she is still in love with Bill and decides to return to the island and reflect on her life. When Kate arrives on the island, she finds that Pat is also there, escaping from her bad marriage to Bill. The twins go sailing and, during a storm, their boat crashes on a reef. Kate tries to rescue her drowning sister, but Pat's hands slip away leaving behind her wedding ring. Kate is rescued and the ring convinces everyone that she is Pat. Even after Bill returns from Chile, Kate maintains the pretense, and when she learns that Bill plans to leave her, she begs him for another chance to make the marriage work. Bill insists that Kate, whom he believes to be Pat, end her affair with Jack Talbot who divorced his wife for Pat. When Kate learns that Pat had many affairs, she is unable to face Bill and leaves for the island. There, she starts to confess her deception to Freddie, who has already guessed the truth and suggests that Kate tell Bill her real identity. She does not have to do this, however, because Bill, who has followed her to the island finally realizes that she is Kate and that he loves her. -TCM 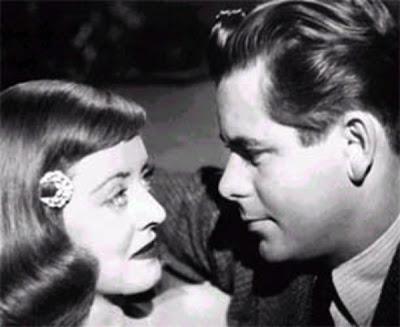 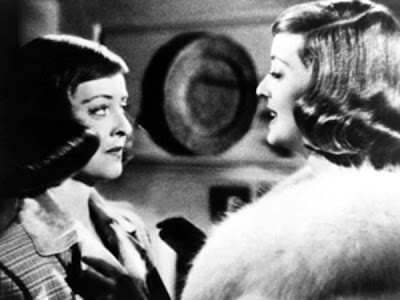 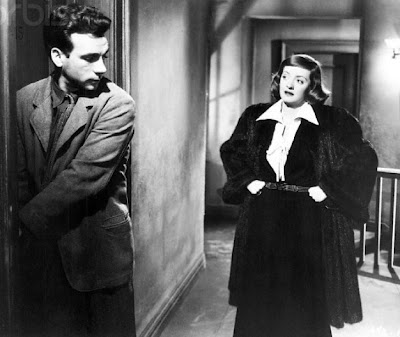 It was a special treat to get two sides of Davis for one. Davis was able to make a marked difference between her and her sister Pat, winning the sympathy of the audience by all the pain she goes through- first as the jilted lover, then as her sister Pat's past is revealed by others negative reactions to her when she pretends to be Pat. I could have done without Karnock, his purpose in the film was to point out Kate's coldness or her inability to be as open or vivacious as her twin Pat, but this is something the audience can easily figure out without his nasty presence which is really overdone.
Overall, I really enjoyed this film, as usual Bette Davis turns out a star performance. The crotchety but lovable Walter Brennan is always a pleasure, and though I did not find his performance wonderful, Glenn Ford does his best up against the star power of one Bette Davis.
Sidenote:
"When I returned from the war, nobody would hire me," he [Ford] recalls. "Then one day I met Bette Davis. She was looking for someone to star with her in A Stolen Life. She asked me: 'Do you have a pipe and a decent jacket?' I was wearing my captain's uniform at the time."
When he returned for a screen test, Ford made sure he had a jacket--and his lucky pipe. Davis loved his audition, "and I got the role," says an ever-thankful Ford, 81. The movie made him a star.


Tonight on TCM!
A Ticklish Affair(1963) A naval commander gets mixed up with a widow and her three children.
Cast: Shirley Jones, Gig Young, Red Buttons, Carolyn Jones Dir: George Sidney
Posted by Sarah at 5:00 AM