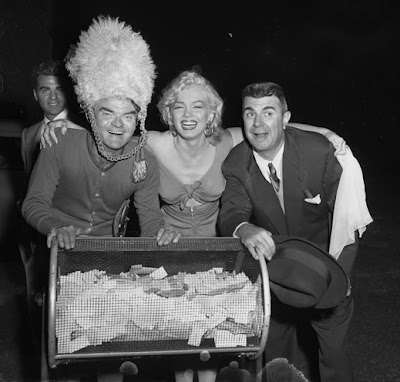 Spike Jones, Marilyn Monroe, and Ken Murray
Over the weekend I watched another film compilation of Ken Murray's. This leaves only Ken Murray's Shooting Stars for me to complete his collection.
I admire Ken Murray in that he was innovative enough to cut out a particular niche for himself in Hollywood by taking home movies of the stars. I hate how the paparazzi and by extension, we the viewers and readers of star rags, allow no privacy for the stars of today. I long for contract players in studios with a publicity machine like days of old. Offering up false but comforting fronts of actors and actresses in their own homes. Ken Murray was able to capture this type of publicity in a unique way- stars playing sports, swimming in the pool with their children, boating, picniking, showing off their homes, or simply walking down their neighborhood street. Mixed in with galas and awards ceremonies, his home movies were played just like that, home movies. By the mid 1930s, as his name became better known and his famous subjects increased, his movies were used by Columbia for short subject series called "Screen Snapshots", clips that we can still see today in documentaries and retrospects. If you have a chance to check out these unique little treasures, do!
Besides putting together these compilations, Ken Murray was also known for his long-running show, Ken Murray's Blackouts.
Ken Murray's Shooting Stars (1979)
Hollywood, My Home Town (1965)
Hollywood Without Makeup (1963)
Posted by Sarah at 5:27 AM