"Come on. Let's get something to eat. I'm thirsty." 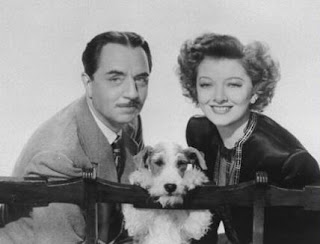 Nick you clever, sly one. You get 'em every time! Here one thinks they may be dealing with a a incompetent detective and frankly, a bit of a drunk, and then Wham! case solved and you're on your way back to the bar/speakeasy. I honestly thought you'd never be left alone and was sad to realize after Song of the Thin Man, you finally were.
Having watched these movies several times throughout my life, I have come to appreciate them even more. My love for Asta's tricks and Nick's and Nora's silly facial expressions evolved into love for the quick, witty banter and obvious on-screen chemistry of William Powell and Myrna Loy. 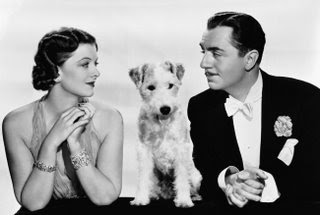 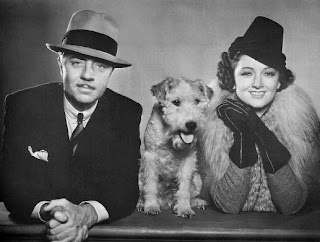 Did you know?
The characters of Nick and Nora are often thought to reflect the personalities of Hammett and his long-time lover, Lillian Hellman.
Because the "Thin Man" title was used for the subsequent movies, it's often mistaken that the term refers to Nick Charles himself; in fact it refers to Clyde Wynant, the mysterious and eccentric patriarch around whom the plot of Dashiell Hammet's book revolves.
The first Thin Man was shot in 16 days.
Myrna Loy's Thin Man salary was reportedly half of the $3,000 a week earned by Powell and she felt that if the studio publicized the two as a team, they should pay them accordingly. Loy held out and L.B. Mayer finally relented -- a record event in the history of a man well known for his threats and tricks to get his own way.
Audiences had trouble separating fact from fiction when it came to Powell and Loy's relationship.
The public was determined to have them married in private life as well. When the two stars showed up in San Francisco (where most of After the Thin Man was shot) at the St. Francis, the hotel management proudly showed "Mr. and Mrs. Powell" to their deluxe suite. This was an especially uncomfortable moment as Jean Harlow, who was engaged to Powell, was with them, and the couple had not made a public statement about their relationship. Harlow saved the day by insisting on sharing the suite with Loy while Powell took another room elsewhere.