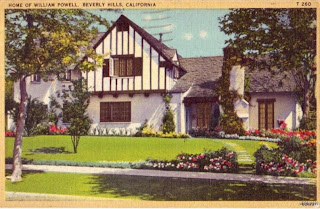 William Powell's house, built adjacent to the Beverly Hills estate of automobile tycoon E. L. Cord, was designed by J. E. Dolena. It was a neoclassical pavilion built on a wooded lot that featured twin tennis courts with galleries for spectators. Jean Harlow helped decorate it, and, despite its rigorously traditional appearance, it was wired for all kinds of electric gadgetry. Alarm bells warned the arrival of visitors, all doors could be operated with foot switches, and all major rooms were equipped with bars, one of which could be transformed into a grill at the touch of a button, a spit rising from the floor and charcoal burners emerging from a closet. Living there seems to have had all the charm of living inside a pinball machine, as Powell explained to the readers of Picturegoer:
I built a house of dream that turned out to be a house of devilish gadgets. The secret panels and disappearing doors never worked right. I'd push one button to go into the parlor and I'd find myself in the kitchen or garden. There were thirty-two rooms in that house and in every one something unexpected was happening. I've been haunted by weird nightmare memories ever since.
-Gone Hollywood by Christopher Finch and Linda Rosenkrantz
Tonight on TCM!
Last night to enjoy a William Powell line-up. It's sure to not disappoint!
Posted by Sarah at 3:16 PM