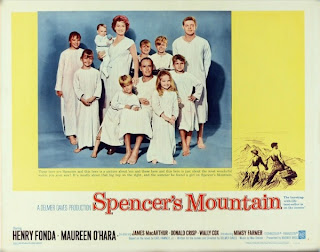 Clay Spencer (Henry Fonda) and his wife Olivia (Maureen O’Hara) live with their nine children and the senior Spencers in the Snake River Valley within the Grand Tetons of Wyoming. They are an uneducated, poor, but hard working people who are about to celebrate their eldest son’s graduation from high school. Clayboy (James MacArthur) will not only be the first of the Spencer’s to graduate but with his teacher Miss Parker’s (Virginia Gregg) encouragement, the first Spencer to go to college. Graduating with honors, Clayboy is very interested in continuing his education, however, paying for that education sets off a series of obstacles that tests the family’s strength and patience. Clay, a man who believes in God but not religion unknowingly signs an application for a clerical scholarship in order for his son to attend university. When Clayboy is denied the scholarship, Clay travels to the school to get to the root of the problem where he discovers the type of application he signed and Clayboy’s non-existent education in Latin that bars him from it. Striking a deal with the Dean for admission without a scholarship, Clay promises that Clayboy will pass the Latin exam by the end of the summer. Learning Latin is small potatoes for Clayboy who along with his family must figure out some way to pay for the first year of school. When Grandpa Spencer’s (Donald Crisp) dies in a tragic accident, Clayboy all but gives up his dream. With the encouragement of his father, he continues to work at the newly developed free library that his teacher Miss Parker has established for him. Despite that job, a little over five hundred dollars must be raised. After swallowing their pride and asking for a loan from a wealthier neighbor who denies them, Clay decides to give up a dream of his own for Clayboy.
Having long promised Olivia that he would build their dream home on Spencer’s Mountain with it’s grand views, Clay burns down the house they have been building all summer and sells the land to his boss Colonel Coleman (Hayden Rorke) at the quarry. Ironically, Coleman is the father to Claris (Mimsy Farmer) who is deeply in love with Clayboy and his family. Too impatient to wait four years for Clayboy to marry her, Claris has herself transferred to Clayboy’s university so they can be together. With the sale of the land, Clay will be able to pay for Clayboy to go to college with the hope that he will be able to assist his younger sibling and so on down the line.

A simple film with a simple theme combined with great performances by Fonda, O'Hara, MacArthur and Crisp (his swan song), there is a lot to love about Spencer's Mountain. It's both entertaining and endearing. It was also the pre-cursor to a favorite show of mine I used to watch as a kid in the eighties- The Waltons. Based on Earl Hamner, Jr.'s life growing up in Schulyer, Virginia during the Depression, the movie and the show differ greatly. For instance, director Delmer Daves did not to use the Blue Ridge Mountains as a backdrop in the film (I am a Virginia girl and though Wyoming's nice, our mountains are nothing to sneeze at!) and some of the grittier themes of the book and film (alcoholism and infidelity) are seriously watered down in the show. The names also differ and in my family, when someone says Goodnight, John-Boy, we're all thinking about this scene:

Ach! Now I want to watch The Waltons.

Be on the look out for Maureen O'Hara's daughter Bronwyn FitzSimons as the Dean's secretary!

Spencer's Mountain was not a great time for Fonda whose new agent, unbeknownst to him, turned down an opportunity for Fonda to perform as George in Who's Afraid of Virginia Woolf? on Broadway. Apparently, the black comedy by Edward Albee was written specifically with Fonda in mind.  Fonda also regretted not being able to perform in the film version which slated him and...wait for it...Bette Davis! Can you IMAGINE?? Bette Davis as Martha? How legendary would that have been? I mean, I LOVE Taylor and Burton in that film- they're fantastic! But Fonda and Davis?? Ach! For all you classic film buffs: Eve and Frank pitted against one another is what springs to mind.

Tonight on TCM!
Joanne Woodward! Check out Rachel, Rachel and Summer Wishes, Winter Dreams! You won't be disappointed!
Posted by Sarah at 6:29 AM