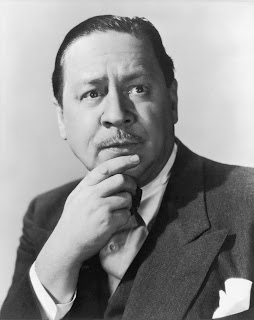 CONFESSIONS OF A WRITER-ACTOR

[Reprinted from The Screen Guilds’ Magazine, 1934]


It is seldom that a writer for motion pictures gets a chance to hoist himslef on his own petard, but several times I have found myself in that humiliating position. I have been called upon to act the lines that I have written. Boys, it’s a living hell, that’s what it is!

In the technical matter of supplying “toppers” (gag lines which cause hard feeling among other members of the cast) I need hardly remind readers of this esoteric sheet that there are certain subterfuges, certain tricks of illusion, which make it look as if a gag had been written when, in reality, all that has been done is dig a space for a gag.

For example, when Mirabelle says to Toots: “Say, what’s the matter with you? You look as if you had been riding a panther,” there us obviously a good chance for Toots to come back with a quick one. After considerable pipelighting, the author of the dialogue compromises as follows: “Toot’s expression speaks volumes, as we FADE OUT.”

Or, when Reilly from Headquarters says to Muggs: “Come on, come on! Whader yer think this is—a flag-pole-sittin’ contest?” the writer is not really polishing off the job in tip-top fashion when he puts down: “If looks could kill, Muggs would have murdered Reilly.” However, in the script, it looks like a complete job.

I must admit that, on such occasions as it has been decided to save an actor’s salary and use me in a bit, I have not know in advance that I was writing for myself. Otherwise, I might have seen my way clear to clean up a few pay-offs which did not involve “experssions which speak volumes.” They might not have been exactly wows, but they would at least, have given me a chance to say something besides “Oh, yeah?” or “Sez you!”

However, it has been too late when I found myself on the set. (I am not one of those boys who can think up a topper on set. I have to have my pipe and a couple of other things—including the topper). I have been in the position of Mark Twain, who on being informed of the report of his death, said: “This is my story, and I’m stuck with it.”

I would like to have some of my little writing-friends get up and try to give an “expression which speaks volumes” by way of answering a gag from somebody else. It is a pretty sickening business. You can raise your eyebrows or lower them, you can purse your lips as if you were going to kiss someone, or you can blow out your cheeks like a comic in the Chave Souris. You can also place your thumbs in your ears and wiggle your fingers. But somehow it never seems to be exactly what the director wants. The only thing to do seems to be to say “Oh, yeah?” and fall over backwards.

This year they seem to have plenty of real actors to go around, and so I am devoting myself exclusively to “the writing end.” But, as I sit with a page of dialogue in my machine in front of me, I think back on the days when I used to be stuck with my own lines (or lack of lines) and try to give the actor a break. I have evolved a new bit of stage direction which avoids putting it up to the actor to kill someone “with a look.” If the Captain has made some crack at Lefty which obviously calls for a returnshot, I write:

“Lefty apparently does not hear.”

Robert Benchley, was a twentieth century humorist, a charter member of the infamous Algonquin Round Table, and a theatre critic for both LIFE and The New Yorker. He was also a wonderful co-star to have in your movie. Though he participated in films, both writing and acting, from 1925 until his death, he is best known for his short subject work. Indeed, that’s how I discovered him. Benchley’s short film How to Sleep was a popular success and won Best Short Subject at the 1935 Academy Awards. This eventually led to a contract for short subject work that produced 48 short films...all of which you should check out.
Posted by Sarah at 10:14 AM