A while back, Sally from Flying Down to Hollywood came up with a wonderful holiday project called The 12 Days of Christmas in order to compile 12 different Christmas film favorites. Here's mine: 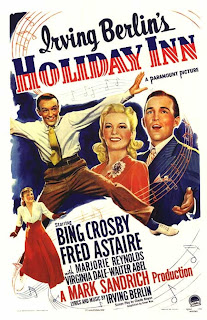 Holiday Inn begins on Christmas Eve when the performing trio of singer Jim Hardy (Bing Crosby), dancer Ted Hanover (Fred Astaire), and singer and dancer Lila Dixon (Virginia Dale) perform what Jim thinks to be their last show together. He plans on marrying Lila that night and heading to the Connecticut farm he’s bought for them. Unfortunately, Lila isn’t ready to give up the limelight and chooses to marry Ted and continue performing instead. Jim admits defeat and heads to his farm with plans to finally relax. 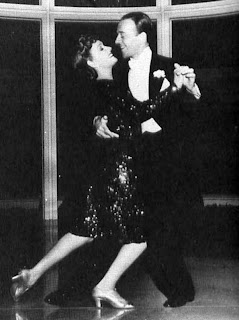 After a year of struggling to keep his farm going, Jim lands himself in the sanitarium for much needed recuperation where he comes up with the less exhausting occupation of turning his farm into a club called Holiday Inn, which features home cooked meals and live entertainment but only on holidays. So on Christmas Eve, Jim heads off to New York to tell Ted and Lila his plans and let his former agent, Danny Reed (Walter Abel) to gather up any talent that may be interested. When Danny runs into Linda Mason (Marjorie Reynolds), an ambitious performer who works in a florist shop, he sends her to Connecticut to audition for Jim where she promptly gets a job. 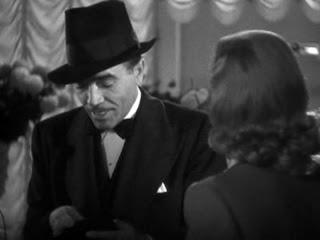 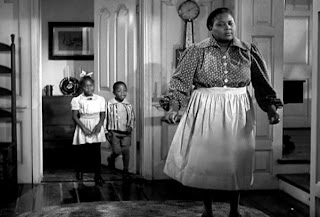 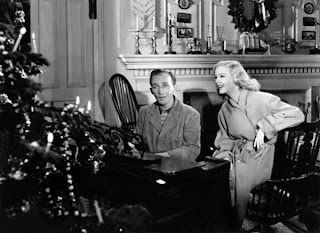 On New Year's Eve Holiday Inn opens to a crowded house and back in New York Ted finds himself jilted by Lila who has run off with a Texas millionaire. Ted arrives at Holiday Inn quite intoxicated and engages in a dance with Linda where he eventually collapses in a drunken stupor. Thinking it all a big gag, the patrons applaud Ted and his “new partner”. However, Jim has fallen for Linda and wonders how to keep her from running off with Ted like Lila did. Much to Jim’s relief, Ted cannot remember who Linda is, however he’s determined to find her, it destiny! 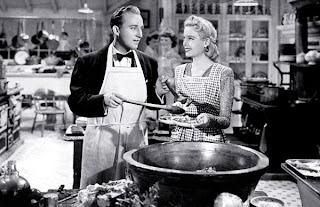 Thus Jim takes on the task of making sure Ted never finds out who Linda is. He makes it through Lincoln’s birthday and even proposes to Linda who readily accepts. However, Ted discovers her on Valentine’s Day and insists that they perform together for Washington's birthday. Though Linda is excited to be Ted’s partner, she wants to stay at Holiday Inn and eventually marry Jim.
When Jim overhears that Danny has brought two Hollywood film producers to see the Fourth of July show and still doubtful that Linda won’t give him up for a bigger career in the spotlight, he asks his driver, Gus (Irving Bacon), to make sure that Linda does not arrive in time for the show. He also invites Lila, who didn’t get marry after all, to perform. Gus, who’s at a loss for how to keep Linda from arriving on time, drives his cab into a pond. When Linda hitches a ride on the road, she is picked up by Lila and learns of Jim’s deceit. She then switches to the driver seat, telling Lila she knows a great shortcut and drives her car into the pond as well. 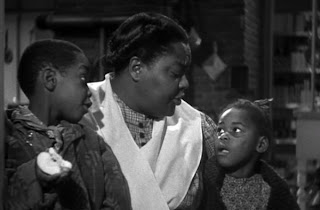 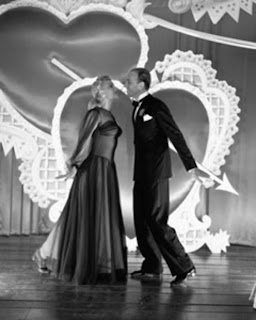 Forced to perform alone, Ted does a wonderful firecracker dance and Linda shows up after the show is over. She accuses Jim of not trusting her judgment and for letting her miss out on the opportunity. The producers offer to buy the idea of Holiday Inn to use as the basis of a musical and Jim reluctantly agrees to the idea, but insists on remaining in Connecticut to write the music while Ted and Linda go to Hollywood.

On Thanksgiving Day, a lonely and dispirited Jim has closed up Holiday Inn, reading that Ted and Linda are engaged he is in no mood to celebrate. His housekeeper, Mamie (Louise Beavers), convinces him to fight for Linda because she knows Linda really loves him. So Jim arrives in Hollywood on Christmas Eve, just before Ted and Linda's wedding and despite Ted and Danny's efforts, wins Linda back. Finally, on New Year's Eve, the two couples, Jim and Linda and Ted and Lila, perform together at the newly opened Holiday Inn. 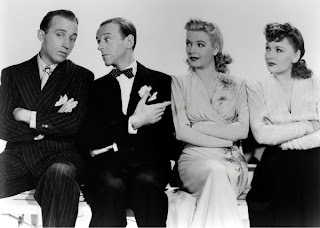 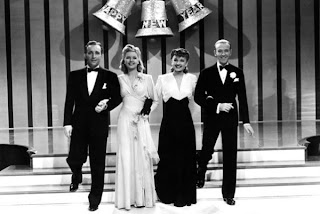 Holiday Inn is one of my favorite holiday movies. I like it because it encompasses all the holidays celebrated including Lincoln and Washington's birthdays which we no longer observe separately. Bing Crosby is hilarious as the jilted and cautions inn owner. His singing, combined with Irving Berlin's music is divine. Then we have Fred Astaire's dancing which is always a treat and escpecially so with his Fourth of July dance. There are many quirky moments in the film and some are quite hilarious such as Jim's explosive peach perserves.
I have only watched the black and white version of Holiday Inn though I hear there is  new special edition out that features the film in color as well. It's definitely worth watching just to see the ultimate song and dance duo perform together.

Trivia:
The animated Thanksgiving turkey that walks between the Thursday dates of the 20th and 27th is a reference to President Franklin Delano Roosevelt’s failed attempt to change the date of the holiday.


The reason behind his change via Wikipedia:

Abraham Lincoln's successors as president followed his example of annually declaring the final Thursday in November to be Thanksgiving. But in 1939, President Franklin D. Roosevelt broke with this tradition. November had five Thursdays that year (instead of the usual four), and Roosevelt declared the fourth Thursday as Thanksgiving rather than the fifth one. Although many popular histories state otherwise, he made clear that his plan was to establish the holiday on the next-to-last Thursday in the month instead of the last one. With the country still in the midst of The Great Depression, Roosevelt thought an earlier Thanksgiving would give merchants a longer period to sell goods before Christmas. Increasing profits and spending during this period, Roosevelt hoped, would help bring the country out of the Depression. At the time, advertising goods for Christmas before Thanksgiving was considered inappropriate [IMAGINE THAT!]. Fred Lazarus, Jr., founder of the Federated Department Stores (later Macy's), is credited with convincing Roosevelt to push Thanksgiving back a week to expand the shopping season.
Republicans decried the change, calling it an affront to the memory of Lincoln. People began referring to Nov. 30 as the "Republican Thanksgiving" and Nov. 23 as the "Democratic Thanksgiving" or "Franksgiving". Regardless of the politics, many localities had made a tradition of celebrating on the last Thursday, and many football teams had a tradition of playing their final games of the season on Thanksgiving; with their schedules set well in advance, they could not change. Since a presidential declaration of Thanksgiving Day was not legally binding, Roosevelt's change was widely disregarded. Twenty-three states went along with Roosevelt's recommendation, 22 did not, and some, like Texas, could not decide and took both days as government holidays.

Tonight on TCM! Actually, it's not until 2AM tomorrow morning but I cannot wait to see this film!
8 1/2 (1963) A world-famous film director juggles his romantic relationships while trying to come up with an idea for his next picture.Cast: Marcello Mastroianni, Claudia Cardinale, Anouk Aimée, Sandra Milo Dir: Federico Fellini
Posted by Sarah at 8:37 AM