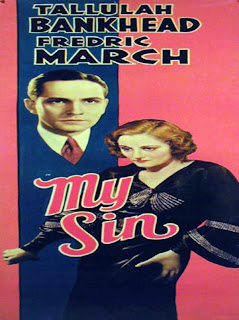 My Sin begins in Panama nightclub where one patron muses on how hot weather and boredom can make a human go to seed. Two prime examples are then showed. First, there is the former lawyer, Dick Grady (Fredric March), a former Harvard man and who now wastes his talent on alcohol. Second is Carlotta (Tallulah Bankhead), the notorious hostess of the nightclub who is being stalked by her blackmailing husband. When Carlotta kills him in self-defense and is arrested for murder no one will take her case but Dick Grady. Proving his talent when he is sober, he proves Carlotta's innocence and again regains respect and employment. Carlotta however, is shunned by society despite the acquittal and forced to leave her apartment. When Dick goes to Carlotta's place to thank her, he arrives just in time to keep her from committing suicide.
They agree then that the persona of Carlotta must die, and that a new, more successful woman should start out fresh. Dick loans her money and together they create her new identity in “Ann Trevor”. Ann then moves to New York and becomes a successful interior decorator while Dick stays in Panama with his new job. Through various letters and repayment checks, Dick realizes that he is in love with Ann and comes to New York in search of her. Meanwhile, Ann becomes engaged to the wealthy socialite Larry Gordon (Scott Kolk). Though Ann is happy to see Dick, when she shares the news of her engagement, Dick disapproves of her not telling Larry about her past.
The next day Ann is introduced to Larry’s family and as fortune would have it, his uncle is the same man that met Ann in Panama as Carlotta, watched the trial, and offered Dick his current job. Will he expose Ann for who she really is? Will Larry’s love for her allow him to accept her past? 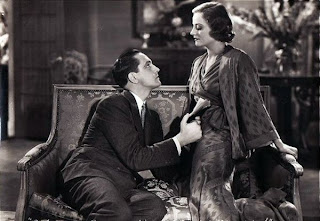 Though you can see that they both give it their best, My Sin has a very weak and trite plot that even two dynamic stars such as March and Bankhead could not do much with. The action is slow, the melodrama is too high, the coincidences too predictable. And there is the ever present double standard- man can triumph over a sordid past but never a woman. My Sin, was Bankhead’s second talkie and clearly Paramount was not sure what to do with her and as history shows, never quite figured it out. Though she looked beautiful in a sort of Joan Crawford way, big lips and heavily mascaraed eyes, and even successfully warbles out a tune in that seductive voice of hers, she seemed made more for the stage and not the screen. Her Briticized voice, most likely from years spent on the London stage, was out of place with her worn shop girl look. As for March, My Sin is another example of how the studio system could completely ignore an actor’s talent (this was after The Royal Family of Broadway and Laughter, after all) and further proof why March had every right to strike out on his own once his contract was up.
Posted by Sarah at 5:29 AM