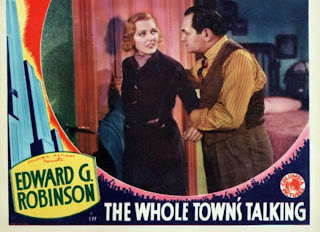 Arthur Ferguson Jones (Edward G. Robinson) is a gentle man, conscientious, timely, caring, and slightly dull. Clearly the pushover type. He's in love with Wilhelmina Clark (Jean Arthur), a co-worker so completely mismatched to himself, she is consistently late to work and adores adventure. When she points out to the office the resemblance between Jones and a picture in the newspaper of the recently escaped convict "Killer" Manion, also played by Robinson, Jones has no idea how his life is about to change forever- much to Clark's delight and his dismay.
While Jones is lunching with Clark for the first time ever, a nearby patron Hoyt (Donald Meek) a calls the police, thinking he will get the reward for Manion's capture. Obviously having a heck of a time convincing everyone who he really is, it's not until Manion commits another crime while Jones is at the station that the police are convinced of the mix up. Jones is then given a pass he can present anytime a cop stops him in the street (sigh...do they ever learn?)
Back at the office, Jones is now considered the top dog. All his co-workers pat him on the back and even his boss (who could not correctly identify him at the poice station) has an exciting proposition for him that will benefit both Jones and his own company. Jones will collaborate with the city paper and have his own article on his opinion of crime despite looking like "Killer" Manion.
When Jones arrives home later that night, he finds Manion waiting for him to share the "pass" so he will be safe at night to commit crime. When Manion learns of Jones' column he demands that Jones' it be turned into his reminiscences, which raises the suspicion of authorities. When the police question how Jones is getting the inside scoop, they decide he'd be safer in jail. Allowed to stop of and collect a few personal items, Manion decides to take his place now that he knows fellow gangster, "Slugs" Martin (Edward Brophy), who turned stool pigeon on him is in the same jail. Successfully killing Martin, Manion escapes jail again (the police aren't catching any breaks in this film) he sets about a series of events that will pit Jones and him against one another with only one victor in the end.
A fun and different kind of film than I am used to seeing from director John Ford, Robinson is also a surprise. He is delightfully hilarious as a humble coward who moons over a slightly crazy Jean Arthur. Having him play against type was a stroke of genius and produced a good piece of work worth checking out.
Tonight on TCM!
Davy Crockett, Indian Scout (1950) One of Davy Crockett's descendants leads a wagon train through perilous territory. Cast: George Montgomery, Ellen Drew, Philip Reed, Noah Beery Jr. Dir: Lew Landers
Posted by Sarah at 5:00 AM