I finally had a chance to sit down and watch two films Cary Grant made in 1934 and of course, prior to his bigger successes in the film business. I began with Thirty Day Princess. While visiting Taronia, Richard Gresham (Edward Arnold) runs into King Anatol XII (Henry Stephenson), who laments that he does not have the funds to provide his peasants a better way of life, like in America. Seeing an opportunity to get back on his feet during the Depression, Gresham offers King Anatol a loan for the amount of fifty million. All he needs to do is come to America to perform the much needed public relations. However, King Anatol cannot leave the country so, it’s decided that his daughter Princess "Zizzi" Catterina (Sylvia Sydney) will go in his stead. Unfortunately Zizzi comes down with the mumps upon her arrival and must be quarantined for a month. Rather than risk losing the loan, Gresham hires an out-of-work actress Nancy Lane also played by Sydney to impersonate the Princess. Complications arise when she falls in love with Porter Madison, owner of the city paper and the man Gresham is paying her extra to divert from investigating the legitimacy of the loans. 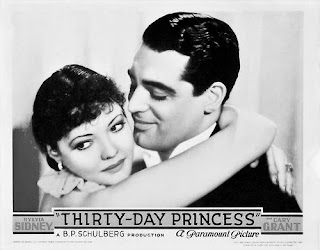 Very little of Cary’s natural charm shows in Thirty Day Princess and the end result is a rather dull movie with some comic relief provided by Vince Barnett who plays Count Nicholeus. However, it should be noted that despite suspending your imagination on how easy it was to find a Princess Zizzi’s lookalike, the viewer is treated to a much overlooked detail in earlier American cinema (or any current film involving Tom Cruise)- the accent. Sydney rarely slips out of it and does a great job being both a princess and a regular American girl.

In Kiss and Make Up, a pseudo musical about a doctor devoted to women’s beauty, we see the stirrings of what will soon be a charmingly hilarious actor who will provide viewers with his great comedic timing and distinct deliverance of dialogue. 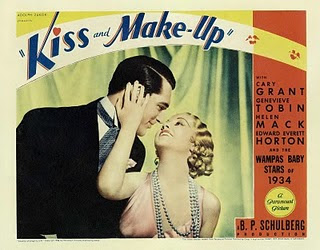 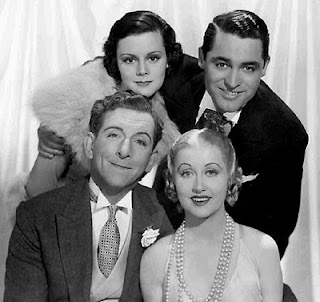 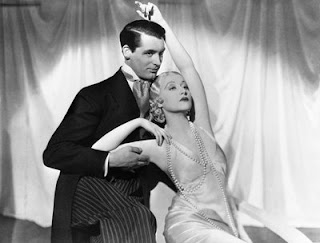 Dr. Maurice Lamar (Cary Grant) believes that all women have a right to beauty and has built an entire empire in Paris around it. When he creates his most perfect piece in Eve Caron (Genevieve Tobin), he does so at the expense of her marriage. Marcel Caron (Edward Everett Horton) used to love his wife when she was just pretty enough, and plump. Now he has to deal with men ogling and wooing his wife as well as her strict regiment (courtesy of Dr. Lamar) in order to keep herself slim and beautiful. When Eve and Marcel divorce she immediately marries Lamar much to Anne’s (Helen Mack) dismay. Anne has been Lamar’s devoted secretary for years. She doesn’t go in for all the beauty mumbo jumbo and encourages Lamar to use his education for something more beneficial. However, she needn’t worry, soon Lamar sees the monster he has created in Eve and decides to quit the beauty business altogether. Thinking to find solace in Anne, Lamar learns that she is now engaged to Marcel (so convenient) and a hilarious chase ensues.
The most interesting aspect about this film is Grant singing. He wasn’t too shabby but it seemed out of place and unnecessary to have him or the other characters singing at all. However, I loved “Corn Beef and Cabbage I Love You”.
Side Note: Excerpt from Marlene Dietrich by Maria Riva
Speaking about a party she went to hosted by Carole Lombard at a fun house on the Venice pier in California: "...Who wants to look at themselves fat? I can have that right here in my bathroom and not look like I have been at war! Remember our shirts salesman? He got in all the pictures next to Lombard. He must have spent the whole evening watching where the photographers were going, and managed to get there before them. 'Ready and handsome,' in position!"
The "shirt salesman" she was referring to was Cary Grant whom she stated that on the set of Blonde Venus he would sell shirts to make more money and that he was so charming that people came from all over to buy them.
He must have been one of the few (and I mean few) men that came withing her sphere and escaped her... charms... as this was the worst she would say of him (she didn't have a lot of nice things to say about anyone according to her daughter). Also, in a conversation with Peter Bogdanovich later in life, Grant stated he saw what was going on between von Sternberg and Dietrich and he didn't want any part of that situation.
Tonight on TCM!
Something called Doctor Zhivago??? I guess maybe it was some sort of big deal at some point in time? ;)
Posted by Sarah at 5:00 AM